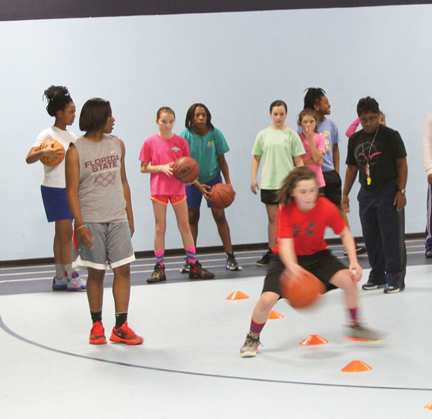 AMERICUS – Several members of the Americus-Sumter High School (ASHS) Lady Panthers basketball team took time from their busy schedules in late February to help impart their love and knowledge of the game onto the next generation of local basketball superstars.
In the midst of their meteoric rise to the state championship title, head coach, Sherri Harris, and five Lady Panthers team members, Atyanna Gaulden, Timia Swanson, Ariel West, Jykiera Long, and Tykiera Long, headed down to the Sumter County Parks and Recreation Department (SCPRD) to help guide some of the team’s potential future players.
Harris spoke with the times-Recorder during a break in the practice drills. “We are doing skill development and fundamental drills,” she said. “That way, when they get to the high school, they’re a little bit better at those things. My understanding is that this is a good group of girls. I’ve been hearing about them, but unfortunately, I haven’t been able to get out here to see them until now.”
Harris went on to say that several of the members of the Lady Panthers’ 2015-16 team were trained at an early age at the SCPRD.
Dwight Harris, Athletic Director for the SCPRD spoke with the Times-Recorder as well, saying, “The rec department is kind of a feeder program for the local high schools. So many of these girls have a lot of athletic ability, but need work with dribbling skills and passing skills and things like that.”
“We have girls like [Gaulden] going to colleges like Florida State that are just awesome,” he continued. “We wanted to do something to try to inspire these younger girls. They often can’t make it to the Lady Panthers games, but the Lady Panthers can make it to their court. They’ll get a chance to see these ASHS girls in action… We’re just trying to take care of one another.” 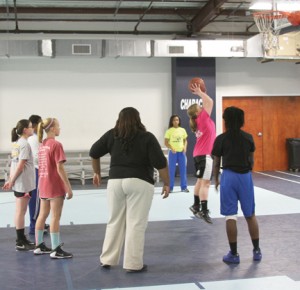