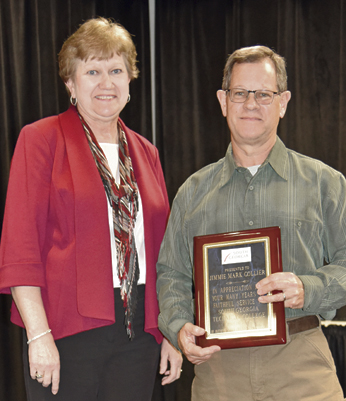 In photo at right, SGTC Acting President Janice Davis presents Mark Collier with a special plaque in recognition of his 14 years of service to SGTC.

AMERICUS — Mark Collier has retired from South Georgia Technical College (SGTC) after 14 years as the college’s horticulture instructor, announced SGTC Acting President Janice Davis. Collier’s family and SGTC faculty and staff celebrated his retirement with a reception in the John M. Pope Industrial Technology Center
Collier began his career at SGTC in 2001, after working in Sumter, Peach, and Houston counties as extension coordinator from 1985 to 2001. He began work on his undergraduate degree in 1977, at Abraham Baldwin Agricultural College before transferring to the University of Georgia and graduating with a bachelor of science in agriculture. He obtained his master of public administration from Georgia College in 1991.
He and his wife, Judy, have three children and eight grandchildren. His wife, brother Craig, and granddaughter Brooklyn attended his retirement reception and were able to hear kind words from SGTC faculty and staff about Collier’s dedicated work at SGTC, and how he went above and beyond his job duties.
“The people here really make SGTC a great place to work,” said Collier. “There’s a lot of talent out here and a lot of dedicated faculty and staff that have helped shape SGTC into what it is today.”

Sumter County Parks and Recreation Department has big plans for 2016

By MICHAEL MURRAY AMERICUS — The Sumter County Parks and Recreation Department (SCPRD) has some big plans for the upcoming... read more