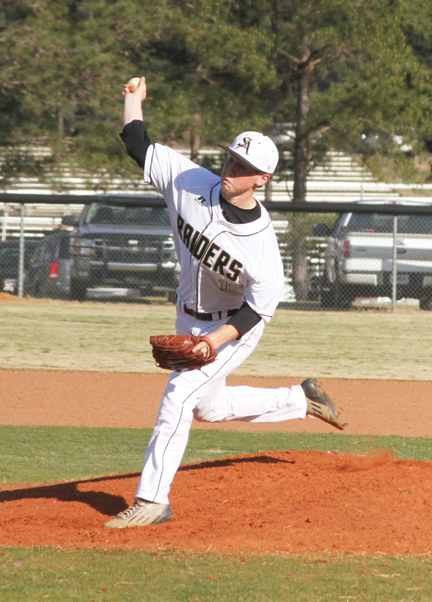 Michael Murray/Americus Times-Recorder: Southland’s Reed Dillard turns up the heat during the Raiders’ region opener against Tiftarea. Dillard pitched five innings in the contest and slugged an out-of-the-park homer in the sixth inning.

AMERICUS – The Southland Academy Raiders baseball team opened region 3-IAAA competition on the afternoon of March 8, hosting the Tiftarea Panthers in Americus.
After taking a small deficit in the first inning, the Raiders pulled ahead in the third and never looked back. In the bottom of the sixth, Raider pitcher, Reed Dillard, put the game away with a two-RBI out-of-the-park homerun, solidifying the Raiders’ lead and cinching the victory.
Tiftarea opened the game’s scoring early in the top of the first inning, after the team’s batters drew a walk and knocked a single to center field.
From there, Dillard managed to pick off the runner at first and pick up a grounder, which he tossed to Stephen Barnes on first base for another quick out. Tiftarea’s fourth batter then stepped up to the plate and nailed a grounder that slipped past Southland’s shortstop, bringing in a runner to take a 1-0 advantage.
The Raiders equalized the gap in the bottom of the second frame, led off by a double from designated hitter, Michael Hudgens. Barnes then exploited a Panther error to proceed to second base and push Hudgens to third. When the next batter approached the plate, Hudgens took an opportunity on a passed ball to cross the plate and tie the game 1-1.
The Raiders struck again in the bottom of the third stanza. Immediately after making an exciting diving catch to close the top of the frame, George Wall approached the plate to knock a single past second base. Southland’s Hoyt Gurley then swatted an impeccably-placed double that hugged the third base line, plating Wall to put the Raiders up 2-1.
Southland’s boys continued their momentum in the bottom of the fourth, after Barnes reached first base on a drive to center field. Townsend Ray then laid down a perfect bunt to push Barnes to second, followed by a single from Brian Miller, which gave Barnes the opportunity to come home.
Dillard then sent another bouncy grounder down the third base line, bringing in Miller to put the Raiders up by three runs at 4-1.
The Panthers clawed their way back into the competition in the top of the fifth, with two runners taking advantage of an errant pitch to make a break for home plate. When the Raiders returned to the dugout, the team’s pad had narrowed to 4-3.
Fortunately, for Raider fans, that turned out to be as close as the Panthers would get to a comeback. In the top of the sixth, Gurley stepped in to relieve Dillard on the mound, deftly striking out the first three batters he faced.
Southland’s boys weren’t finished scoring, however, and the team took this momentum into the dugout.
Miller opened the bottom of the inning, advancing to second base on an error before proceeding to third on another. Wall then drew a walk with Dillard on deck. As Dillard stepped up to the plate, Miller made a dash for home on a passed ball, tacking on one more run for the Raiders.
Tiftarea’s next pith flew right into the sweet spot and Dillard took a powerful swing to the cheers of the home fans, who watched the ball gracefully sail out of range. After trotting around the diamond, Dillard and Wall were greeted at home plate by their excited teammates’ congratulations.
When the Raiders took the field again, Gurley faced three more batters, striking out one. The next two batters popped up shots that were easily caught, as the Raiders claimed the 7-3 win.
Dillard spent five innings on the mound, working for the Raider cause. During his time on the hill, Dillard struck out six batters, walked only one, and gave up seven hits.
Gurley wrapped up the final two innings for the Raiders, striking out four batters while not giving up a single hit or walk.
Seven different Southland batters logged hits in the match, with Dillard leading the way. Dillard connected on three shots, including a double and a homerun in four appearances at the plate. Hudgens, Wall, Gurley, Barnes, Ray, and Miller each contributed hits as well, with Gurley hitting a double for the Raiders.
Dillard brought in three RBIs for Southland, while Gurley and Miller each added one.
The Raiders traveled to Dawson to face the Terrell Academy Eagles on March 11 for another region contest. The results of this match were not available at press time.
The Raiders will return to 3-IAAA action on March 15 when the team heads to Thomasville to face the Brookwood Warriors. 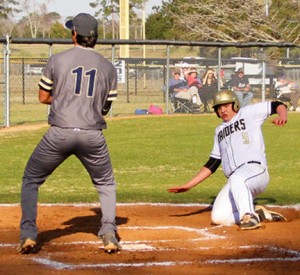 Michael Murray/Americus Times-Recorder:
Southland’s Michael Hudgens slides into home plate on a passed ball during the second inning of the Raiders’ March 8 contest against Tiftarea. *Image has been altered to remove an extraneous element.