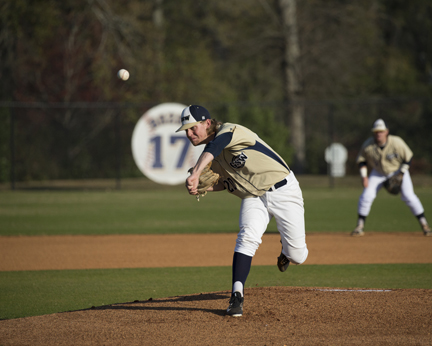 Chris Fenn/Georgia Southwestern State University: GSW’s Dylan Brown launches a fastball on March 8 in Americus. Brown kept Trinity Baptist College off the board for seven innings in the contest, giving up only two hits.

AMERICUS – Georgia Southwestern State University (GSW) starting pitcher, Dylan Brown, threw seven scoreless innings and the Hurricanes piled on some late runs to defeat Trinity Baptist College (TBC), 9-2, on March 8.
The Hurricanes traveled to Albany State the following afternoon for a non-conference tilt with the Golden Rams. The Hurricanes earned another hard-fought 10-4 win over their hosts to improve the Americus team’s non-conference record to 12-0 this spring.
With the win, GSW improved its overall record 13-8.
In the March 8 match, Brown (1-0) walked the first batter of the game, allowed a single to the second hitter, then proceeded to retire 12 in a row. He worked out of a jam in the fifth before retiring the side in order in the sixth.
On the flip side, Aaron Crowe broke up Trinity Baptist’s bid for a no-hitter in the fifth inning with a one-out single to right field. Crowe scored two batters later on a Zach Barron single through the left side to put the Hurricanes on top, 1-0.
GSW added a pair of runs in the sixth inning behind an RBI double from Josh Logan and Jared Jones’ RBI single. The Hurricanes lead was extended to 6-0 with three-runs in the seventh.
After Trinity Baptist plated two batters in the eighth inning, Barron belted a two-run double over the left fielder’s head in the bottom half of the frame to score Clay Patrick and Evan Alderman. Brett Burgess brought home Barron for the final run of the evening on a sacrifice fly.
Barron was the lone Hurricane batter to finish with multiple hits. He turned in a two-for-four performance with three RBIs, a walk and a run scored. Burgess drove in two.
Brown held TBC to two hits during his time on the mound, walked four and struck out three. Kyle Spinks covered the final two innings, walking one and striking out four.
TBC starter, Michael Cohick, went six and two-thirds innings, allowed five hits and four earned runs, walked five, and struck out six. Dan Richard and Dustin Dykes each threw two-thirds of an inning and had two walks. Richard was tagged for three runs.
Details of the March 9 Albany State match-up were not available at press time.
The Hurricanes return to the diamond in Americus on March 12, hosting conference foes, Montevallo, in a double-header. Games are scheduled to begin at 1:00 p.m. and 4:00 p.m. The Hurricanes will wrap up the series against Montevallo on March 13 at 1:00 p.m.

Despite Tierce’s 10th homer of the season, Lady ‘Canes…