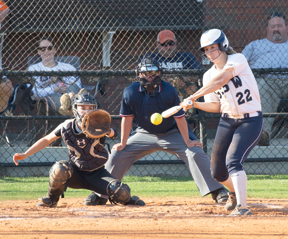 Chris Fenn/Georgia Southwestern State University: GSW’s Hayley Tierce takes a powerful swing in the Lady ‘Canes’ March 8 match-up against Emanuel College. Tierce hit her tenth homerun of the season during the next day’s double-header against Columbus State in Columbus.

The Georgia Southwestern State University (GSW) Lady Hurricanes hit the diamond in Americus on March 8 at Lady ‘Cane Field for a double-header against the Emmanuel College (EC) Lady Lions of Franklin Springs.
The GSW ladies suffered a tough loss in the afternoon’s opener to the visiting Lady Lions before returning to the field to even the score with a 1-0 victory.
The following afternoon, the Lady Hurricanes traveled to Columbus to take on the Columbus State University (CSU) Lady Cougars.
Despite GSW freshman, Hayley Tierce hitting her tenth homerun of the season during the team’s second double-header in as many days, the Lady Hurricanes suffered a pair of 5-2 defeats at the hands of the Lady Cougars.
GSW’s record now stands at 17-13 overall and 2-2 in the Peach Belt Conference (PBC).
When the week’s action began on March 8, Emmanuel jumped to an early one run lead in the first inning off a throwing error by the catcher. GSW took the lead with two runs in the bottom of the first; Steele scored off a single from Joshlyn Martin and Ella Hawkins scored off a walk.
The Lady Lions pushed six across home plate in the third frame off an RBI double, four singles, and a walk. EC scored another in the fourth off another RBI double to lead 8-2.
GSW’s Graysen Sanders scored off a walk in the fourth stanza and Rebekah Davis crossed the plate off a wild pitch to trail by four runs.
Emmanuel pushed seven more across home plate in the top of the fifth inning off three errors and a three-run double to win 15-4 and wrap up the game in a run rule.
GSW finished with three hits, four runs, three RBIs, and four errors.
Kaley Sikes (L, 1-3) pitched two and two-thirds innings, had eight hits, seven runs, walked four, and struck out none.
Savannah Carlisle pitched one and one-third innings, had three hits, four runs, walked three, and struck out one.
Haley Goodson pitched one inning, had two hits, four runs, walked one, and struck out none.
In the series nightcap, the Lady ‘Canes dusted themselves off and determinedly fought for their 1-0 victory.
The game went scoreless until the bottom of the sixth, when Steele scored the lone run for GSW. The Lady ‘Canes defense held off Emmanuel to take a one run win.
GSW finished with three hits, one run, and one RBI.
Haley Goodson (W, 6-5) kept Emmanuel off the scoreboard for all seven innings. She had two hits, no runs, walked one and struck out four.
The Lady ‘Canes hoped to ride the momentum of their late victory to a repeat performance the next day, but the CSU squad had other plans.
GSW took a two-run lead in the top of the third inning. Nikki Graham started the rally with a single to the left side and moved to second off a single from Steele. A fielding error placed Hawkins on first base and moved Steele to second while Graham proceeded to third. A single from Mikela Barlow plated Graham and Steele scored off a sacrifice fly from Tierce.
CSU tied it up in the bottom of the third off a throwing error, scored two more runs in the fifth off a wild pitch coupled with a sacrifice bunt, and scored one in the sixth off a single to win the match 5-2.
GSW finished with four hits, two runs, two RBIs, and two errors.
Brittany Childs (L, 4-3) pitched six innings, had nine hits, five runs, walked three and struck out two.
The Lady ‘Canes’ luck didn’t improve in the second match of the afternoon.
CSU jumped to a one-run lead in the first off a single to left center and scored two more in the third.
Tierce scored in the bottom of the fourth off a double from Haley Warner and scored again in the sixth off her solo home run.
CSU scored in the fourth and sixth to take another 5-2 win.
GSW finished with eight hits, two runs and two RBIs.
Haley Goodson (L, 7-5) pitched six innings, gave up 14 hits and five runs, walked one and struck out one.
The Lady ‘Canes will take their home field on March 12 to play a PBC double-header against Francis Marion University. The game is scheduled to begin at 12:00 p.m.

Lady Panthers take a time-out to help guide next…