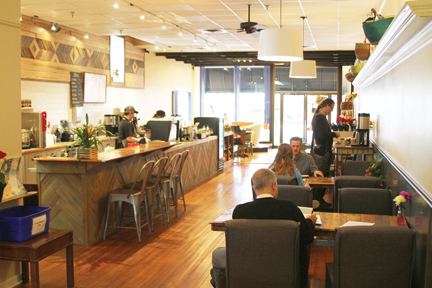 Michael Murray/Americus Times-Recorder: Patrons at Café Campesino’s downtown location on Lamar St. enjoy the shop’s atmosphere as as well as the variety of drinks, snacks, and other goods offered at the establishment.

AMERICUS — Local coffee roaster and retailer, Café Campesino, has had an exciting and challenging 2015. Bill Harris, company CEO and co-founder, shared this sentiment with around 300 economic developers on Feb. 15 in Atlanta during a business luncheon that honored stand-out small businesses across Georgia.
Harris explained that his Americus-based coffee company has moved more heavily into the North Georgia market, opened a flagship store in downtown Americus, rolled out a new webstore, transferred accounting and inventory systems to a new platform, and begun a brand refresh project all over the past 12 months. “It’s been a very busy year,” he said.
The Georgia Department of Economic Development’s entrepreneur and small business division had previously asked Harris to speak at its Small Business Rock Star awards ceremony, an annual event that celebrates the efforts of outstanding small business in the state and highlights six award-winners that are selected from a pool of hundreds of nominees. Café Campesino was a 2013 award recipient.
Since opening its doors in 1998 as an importer of specialty green coffee, Café Campesino has become a coffee roastery and coffee shop with an additional roasting location in Gainesville, Fla.
Last year, Café Campesino decided to develop more expertise in retail coffee sales, responding to a growing trend in the coffee industry in which small roasting companies are opening in small towns across the U.S.
Rather than solely supply roasted coffee beans to coffee shops, Café Campesino now sells related inventory, such as cups, syrups, teas and smoothie bases to coffee businesses across the state, including a newly won customer located inside the Centers for Disease Control and Prevention (CDC) in Atlanta.
The company is also working to develop an expertise in coffee shop management so that it can offer tutelage to its new wholesale customers, as well as open more of its own retail shops across the Southeast.
The focus on retail coffee sales has forced Café Campesino to make a number of tough decisions in 2015. As a result, the company has taken on a new, more robust inventory and accounting system; has improved its online sales capacity; has continued weekly deliveries to Atlanta and bi-weekly deliveries to North Georgia and North Carolina; has undergone a brand and logo update, and has moved its coffee house into a free-standing location in downtown Americus.
Café Campesino’s coffee house move (out of its roasting facility on Millard Fuller Boulevard to Lamar Street, across from Little Brother’s Bistro and the historic Windsor Hotel) is perhaps the most evident change for Café Campesino fans in the Americus region. The once quaint, hidden, and unassuming coffee house has taken on a new identity and filled a new, larger space at 134 W. Lamar St.
The location that opened in late December took six months for renovations to be completed, relying heavily on local businesses and craftsmen, and drawing from the city of Americus’ revolving loan fund to help finance part of the construction.
The coffee house opened around eight months after Bittersweet, a Café Campesino wholesale customer that sells coffee and books, opened its doors in the historic Glover Opera House building on Forsyth Street. “Having two coffee houses in downtown Americus is a good thing,” says Nema Etheridge, Café Campesino’s coffee house manager.
“The more Americus has a concentration of interesting, welcoming businesses downtown, the more it becomes a destination for people to visit and ultimately live,” said Etheridge, who took on management of the coffee house after working in various sales and marketing roles for the roastery since 2008. Etheridge also worked at Café Campesino’s now-closed coffee shop that opened in Atlanta’s Sweet Auburn Curb Market in 2009.
“I learned a lot from that experience,” Etheridge said, explaining that one of the challenges to the Atlanta location — which closed in 2012 — had been its limited physical space and its inability to offer a robust lunch menu in a market that was mostly frequented by lunchtime customers.
As a result, Café Campesino’s new Americus location was built to accommodate a lunchtime offering, even though the new location still only serves breakfast-and-snack-oriented items.
“Restaurants are a totally different animal, and before we got too deeply into that, I really want to make sure that we can develop systems and processes that can be replicated in traditional coffee houses,” Etheridge stated. “We must be able to brew and consistently serve excellent coffee and customer service no matter who is on staff. Plus, applying Café Campesino’s values to a food menu is an important challenge that will take a little time to figure out,” she continued, referring to the company’s commitment to sourcing 100 percent organic and fair trade coffees.
Bringing a principled approach to the coffee industry was the original reason for the company’s inception, according to Harris, who cites “the Golden Rule,” as the company’s trading philosophy and underscores Café Campesino’s ultimate goal as being “to buy more beans from coffee farmers and grow more business in Americus.”
To that end, Café Campesino and Cooperative Coffees (the spin-off coffee importing cooperative based in Americus that Harris managed for around 10 years) are preparing to welcome about 50 coffee industry professionals to Americus in mid-April, after the Specialty Coffee Association of America’s annual conference is held this year in Atlanta. Visitors are expected to stay at least two nights at local hotels and hail from across the U.S. and Canada, as well as coffee-producing countries such as Guatemala, Colombia, and Peru.
Etheridge says she hopes to be serving lunch at the coffee house by then and potentially even staying open late on certain nights of the week. The coffee house is currently open from 7  a.m. to 6 p.m. Monday-Saturday, and is the sole location for customers looking to purchase pounds of coffee to take home. The roastery is no longer available for by-the-pound sales. To order coffee in advance, customers are encouraged to contact the business at 229-380-0439.