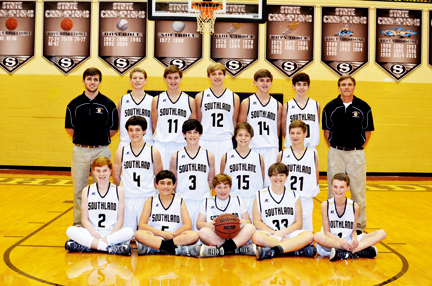 AMERICUS – The Southland Academy C-Team boys basketball squad recently completed an undefeated season and went on to earn a win in the Region Championship.
With 12 wins in regulation play, the Raiders’ seventh and eighth-graders showed the teams’ fans that the future of Southland’s basketball program looks bright as they plowed their way through the competition to earn a spot in the region tournament.
The young Raiders saw their largest margin of victory in the regular season in a 54-13 win against St. Theresa’s Catholic School in Albany. The team’s toughest competitors of the season were the Terrell Academy Eagles, who held the Southland boys to a three-point win, as the Southland boys finished the match with a tight 32-29 victory.
On average, the C-team Raiders won by a margin of 17 points in each of their contests during the regular season.
In February, the young Raiders traveled to Chula to take on the Tiftarea Panthers for the first round of the region tournament. Southland earned a 22-19 win in the contest to punch their ticket to the final game against Brookwood.
In their season closer, the Raiders dealt a 32-26 defeat to runners-up, the Brookwood Warriors. The victory solidified their spot at the top of region 3-IAAA basketball competition.
The Raiders’ C-Team is led by head coach, Mike Shattles, and assistant coach, Rolie Hancock.
The team was honored for their impressive accomplishments on the court in a small ceremony during the half-time break of one of the Raiders’ boys varsity competitions earlier this year.