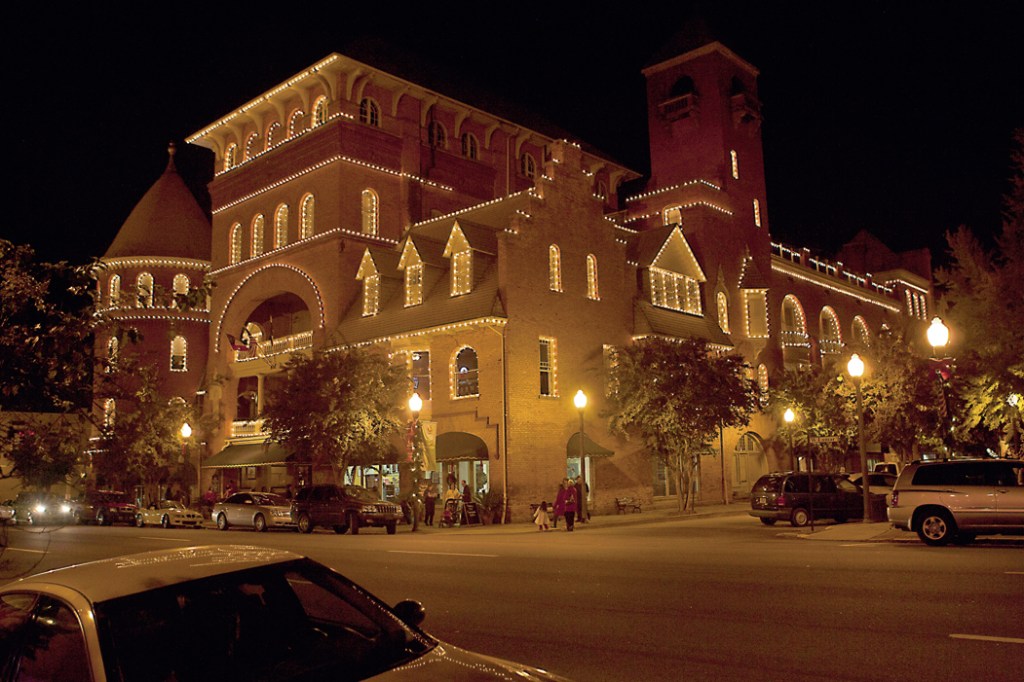 A night-time shot of the historic Windsor Hotel in downtown Americus.

AMERICUS — The Americus City Council recently voted unanimously to approve the reorganization and restructure of the Americus Main Street program and the Downtown Development Authority. Consultant Sharlene Cannon spent the past two months communicating with merchants in downtown as well as property owners, in an effort to receive input.
Cannon rolled out the plan to mayor and council early this month at a called meeting. City Manager Steve Kennedy, in his introduction of Cannon, said, “There are vacancies in several departments so this is a good time to assess how we’ve been doing it. The community’s success hinges on it.”
Cannon, a veteran Main Street guru, said she “loves this downtown, the people and the businesses. I am passionate about small-town America,” adding her thanks to the city for the opportunity.
Americus first became involved in the Main Street program 1982. The program morphed into the tourism division over the years and somewhat lost its focus, but there are ways to revitalize the program using existing assets and that’s where Cannon comes in. 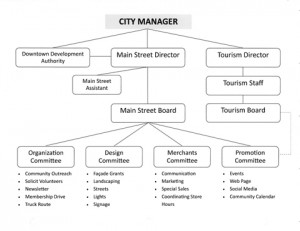 Cannon explained her plan:
Separate the Main Street program from the tourism program in the city. Reorganize the Downtown Development Authority (DDA), which was first created with seven members appointed by the city to put together deals, etc.
“Currently, the DDA functions like a Main Street board,” Cannon said.
The plan has the DDA, a Main Street director (yet to be hired) and a tourism director (also an open position) all reporting the Kennedy. The Main Street director will oversee an assistant and the Main Street board. The tourism director will oversee tourism staff and the tourism board.
As soon as a Main Street director is hired (Cannon urges hiring an experienced individual), he or she will create a Main Street board (which can include some of the current DDA members). This board will oversee several committees: organization, design, merchants and promotion.
Cannon stressed the importance of communication in making these changes.
“Americus needs to pull together and get everyone on the same page,” she said. “There is not enough connectivity.”
Cannon praised the work of the Welcome Center staff and suggested combining the Community Development and Planning and Zoning areas.
“The Main Street program is completely dependent on city employees to get things done,” she said.
During her survey of downtown merchants and individuals, Cannon gathered many comments and concerns, some of which she shared with the mayor, council and the public.
• Lack of code enforcement.
• Open hours and days for downtown businesses need to be coordinated.
• The parking ordinance is not be enforced.
• There is no signature event.
• The police are not walking the downtown beat.
• The truck route has not been completed.
• There is a lack of leadership.
• Need to promote downtown living.
• Need to activate trolley for college students.
• Need to boost the Windsor Hotel.
• Need a facade grant program.
• Need to follow up on the Renaissance plan and get involved.
Cannon said in order to make the reorganization effective, there must be broad-based community support, strong public and private support, an annual budget and a clear plan and vision.
In order to get started, Cannon told the mayor and council that  there are some criteria: restart the Main Street program, embrace what Main Street stands for, appoint visionaries to the boards, follow up on the Renaissance plan, keep streets/sidewalks/landscaping clean (“no detail is too small for downtown”), insist on code enforcement on problems that impact downtown (provide adequate staff).
“Think about Main Street as an economic engine,” she said. “As goes downtown, so goes the rest of the community. Stop doing the same old thing out of habit.”
Cannon gave a profile of a DDA member: is a community leader, has integrity and respect, is a visionary, is dedicated to economic success, is a risk taker, has a knowledge of state and national funding programs and is passionate about downtown.
Cannon said that when she visited Americus in 1992-93, she was envious of the Windsor Hotel and the Rylander Theatre, and that when she went to Thomasville as a Main Street director, she aspired for Thomasville to become like Americus. Thomasville today has a vital downtown with streets filled with visitors and shoppers every weekend, and new businesses popping up.
The profile of a Main Street board member, according to Cannon: is a worker, has wisdom, possesses wealth, is an advocate for and ambassador of the Main Street program, has plans for the long term and the short term, helps carry out the vision and work plan, recruits a wide range of volunteers.
“Nothing is more important than getting the community involved in this program,” Cannon stressed, “from all walks of life, all inclusive.”
Lastly, Cannon urged the city leadership: “Don’t rest on your laurels; you need to get to work and keep up the momentum.”
City Council has since appointed four individuals to fill the unexpired terms of the previous DDA members that are going to change over to the new Main Street board. Those four appointed are Russell Thomas Jr., George Hooks, Robert Parks and Rick Whaley. The four former DDA board members going to the Main Street board are Divya Patel, Richelle Bivins, Matt Morgan and Carla Cook.