‘Canes drop to 14-10 after Montevallo series 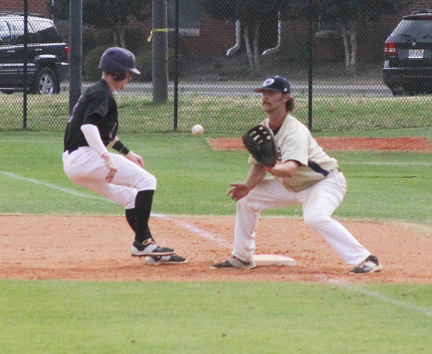 Michael Murray/Americus Times-Recorder: GSW’s Davey King stoops down to catch ‘Canes pitcher, Layne Gusler’s, attempt at picking off a Montevallo runner at fist base during the second game of the Hurricanes’ three-match series against the Falcons. The ‘Canes went on to win the match 4-2.

AMERICUS – The Georgia Southwestern baseball team dropped two of three games in its Peach Belt Conference series against the University of Montevallo (UM) on March 11-12 at Hurricane Stadium in Americus.
GSW surrendered five runs over the final two innings of the opener in a 7-1 loss on Friday evening. Jordan McIlwain turned in a stellar performance on the mound the next day in game two to lead the Hurricanes to a 4-2 victory. Heartbreak came in the finale as GSW let a 3-2 lead slip away in the ninth inning and the Hurricanes suffered a 7-4 loss.
Southwestern closed the weekend with an overall record of 14-10 and a 2-10 mark in the PBC, while Montevallo improved to 14-11 overall, 7-5 in conference play.
In the series opener, Montevallo took the lead in the second inning with a two-out run off a GSW throwing error.
Dane Hutcheon drove in what would prove to be the game-winning run in the fifth inning for Montevallo with a two-out triple that scored J.D. Minor.
The Hurricanes pushed across their lone run in the series opener in the sixth when Alex Kranick plated Josh Logan with an infield single to shortstop.
Southwestern starting pitcher, Earl Dupree (2-3), exited with one out in the seventh inning. Dupree held the Falcons to three hits, was charged with two runs, walked six, and struck out three batters. Matt Hubbard pitched one and two thirds innings and surrendered three runs. Chad Adkins covered the ninth.
Nick Fonseca hit three-for-four with a pair of doubles to lead GSW batters. Zach Barron added two doubles.
Thomas Bradey was three-for-four with a double and two RBIs for Montevallo.
Falcons starter, Aron McRee (4-1), went the distance and struck out 10 while walking only one batter.
The next day, the Hurricanes returned to their home field, determined to turn their luck around as they faced the Falcons in the day’s early match.
The Hurricanes rallied from a run down in the seventh inning to force a rubber game in the series.
Will Redding delivered a two-out single in the fourth to bring home Jared Jones and put GSW ahead, 1-0.
Montevallo took a 2-1 lead in the seventh inning after a Chad Wagner RBI single.
Logan came through with a sacrifice fly in the bottom half of the seventh after Jones opened the frame with a double and advanced to third on a sacrifice bunt.
Davey King drove home the game-winning run in the eighth inning when he plated Evan Alderman with a RBI single down the left field line.
Southwestern starting pitcher, Jordan McIlwain (3-2), threw 113 pitches as he went into the ninth inning. He scattered five hits, walked two, and struck out three.
Mitch Holloway entered with two on and no outs in the ninth. Montevallo executed a sacrifice bunt before Holloway delivered a pair of strikeouts to earn his second save of the spring.
Jones was two-for-two with two doubles and a walk to lead the Hurricanes.
Jeremy Hyde collected two hits for Montevallo.
UM starter, Jamison Roney (3-1), pitched seven innings, allowed three runs, scattered five hits, walked three, and struck out four. Kale Latorre closed out the afternoon for the Falcons.
In the evening’s nightcap, the Hurricanes got off to a great start, but succumbed to a late Montevallo rally that led the visitors to a 7-4 victory.
Alex Kranick ripped a solo home run down the left field line in the first inning to give GSW an early 1-0 lead.
Montevallo pushed across a run in the fourth and another in the fifth inning to take a short-lived, one-run lead as GSW quickly answered with a pair of runs in the bottom of the fifth off RBI singles from Alderman and Barron.
GSW carried its 3-2 lead to the ninth inning and thought for a moment that the game might be over when Hutcheon hit a one-out chopper over second base with a runner on first that Barron fielded, touched second, and fired to first for a potential game-ending double play that was ruled a split second late at first.
With new life, the Falcons proceeded to rip back-to-back doubles en route to a five-run frame.
Southwestern starting pitcher, Layne Gusler, threw seven innings, allowed two runs (one earned) and seven hits, walked three, and struck out five. Kyle Spinks (0-1), half a step away from getting the save, suffered the loss.
Alderman had three hits and an RBI to lead the Hurricanes. Logan added two hits.
Hutcheon and Dominic DeVille collected three hits apiece to lead Montevallo at the plate. DeVille drove in three. Jeremy Hyde went two-for-three with two walks.
Montevallo used five pitchers in the finale. Starter, Cody Hughes, tossed six innings and did not factor into the decision. Alex Pondick threw an inning of relief before Chris Piteo (1-0) was the beneficiary of the Falcons comeback. Kale Latorre tallied an out in the ninth and Colton Nussel forced the final two outs.
GSW returned to action on March 15 for a non-conference game against Tuskegee University. The results of this match were not available at press time.
The ‘Canes will hit the diamond again on March 19, traveling to UNC Pembroke for a three-game series.