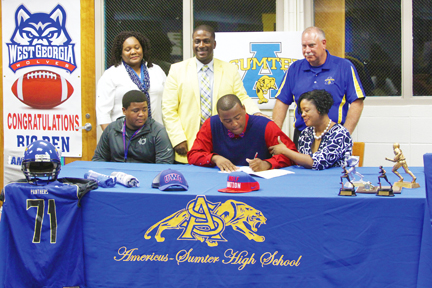 AMERICUS – An Americus-Sumter High School (ASHS) multi-sport athlete, Ben Walters, took a big step towards his future on March 15 at ASHS as he signed a scholarship agreement with the University of West Georgia (UWG) to join their football team, the Wolves, on the gridiron next season.
Walters, a 6’3”, 250-pound Americus native, has been playing football for the Panthers for four years. Walters began his high school career as a defensive end in his freshman year and began starting as an offensive lineman as a sophomore.
In both his junior and senior years, Walters has been named first team All-Region as well as first team All-Area. At the conclusion of his senior season, Walters was nominated to participate in the All-Star game, but was unable to participate due to an injury.
In addition to football, Walters plays basketball and runs track for the Panthers. For his contributions to the Panthers on the basketball court, Walters was named third team All-Region as a junior. On the track, Walters made it into the second round of the state tournament in the shot-put event that same year.
Asked about his decision to attend UWG, Walters told the Times-Recorder, “It feels like home. I visited Fort Valley and it didn’t feel like home. When I went to West Georgia, it felt organized and everything was clean. I love the coaches. The coaches there are players’ coaches. They like to joke around and stuff, but when it comes time to get serious, they buckle down. I like that.”
Walters said that he will likely be playing the position of center or defensive end for the Wolves. “They told me that I’ll probably have to gain some weight if I want to play on the offensive line,” he said. “I have a lot of time, so we can talk about it after I sign.”
Walters said that he would like to work towards a career as a football or basketball coach, so he is interested in pursuing sports management as a course of study. He also expressed interest in learning about athletic training and sports medicine while in college.
When he is not training for athletics or studying, Walters enjoys using his free time to play pick-up basketball in the park with his younger brother and spend time with his mother.
After the letter of intent was signed, Walters’ mother, Leslie Walters, addressed the crowd of supporters who had gathered in the ASHS media center, thanking Panther head football coach, Erik Soliday, for all of his hard work. “You really took care of the boys,” she told Soliday. “You really helped them find these opportunities, reaching out to colleges and sending them game film. The kids do the work, but sometimes they need a little extra help getting the exposure and Coach Soliday did that.”
After the signing, Soliday told the Times-Recorder, “It’s just great to see him get an opportunity to go on like this… to know what he’s going to do and where he’s going to go. It’s great to see these kids get the chance to go on and play at the next level. It’s a great achievement and not that many kids get this chance. We’re really proud of him and looking forward to seeing what he can do. I know he’ll be successful.”
ASHS principal, Kimothy Hadley addressed the crowd during the ceremony, saying, “We’re very proud of Benjamin and all of his accomplishments… in the classroom first… and what he does on the field… He keeps himself busy and he keeps himself competitive. He has a competitive spirit… The guys who’ve played with him, since he was at the recreation department up until now, certainly know his competitive spirit…”