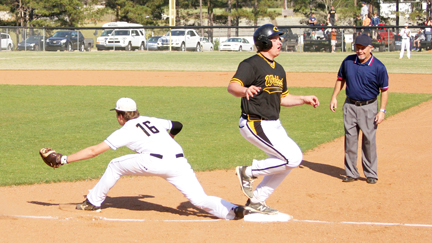 AMERICUS – The Southland Academy Raiders baseball team returned to their home court on March 21 to battle non-region opponents, the Crisp Academy Wildcats. The young Raiders made a valiant effort in the contest, highlighted by a late solo out-of-the-park homerun off the bat of third baseman, Hoyt Gurley, and solid hits from Parker Weldon and Will Hubbard.
Unfortunately for the home fans, however, the Wildcats took an early lead in the top of the third frame which they eagerly guarded throughout the remainder of the contest, eventually sentencing the Raiders to a 5-4 loss.
With the defeat, the Raiders’ drop their overall record to 5-2 on the 2016 season.
The Wildcats opened the scoring early in the first stanza, pushing a runner across the plate before starting Southland pitcher, Michael Hudgens managed to snag the third out, grabbing a hard drive that was rocketing down the middle out of thin air to send the Raiders into the dugout.
Hubbard and Harrison Bell each belted singles into left field to put the Raiders within striking distance before Reed Dillard stepped up to the plate. Hubbard took advantage of a passed ball to complete the second half of his journey around the bases and equalize the score, 1-1. 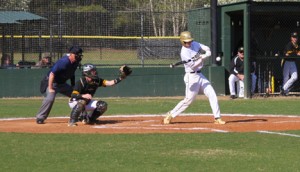 Michael Murray/Americus Times-Recorder:
Southland’s Parker Weldon swings for the fences during the first inning of the Raiders’ March 21 tilt against the Wildcats.

The top of the third stanza saw a Wildcat batter open with a hit before his teammate  belted a double deep into centerfield, allowing him to come home. When the Wildcats’ final batter of the stanza stepped up to the plate, the runner exploited an error to cross the plate and put Crisp up 3-1 before the close of the frame.
Dillard opened the bottom of the frame with a walk before a ground-rule double from Gurley pressed him on to third. Weldon went on to slug a single into right field and plate Dillard, narrowing the gap to 3-2. Gurley took off on a Stephen Barnes grounder to come barreling home and tie the score 3-3.
The Wildcats scored again in the top of the fourth and fifth innings to take a 5-3 lead into the bottom of the seventh. Dillard brought Southland within one as opened the Raiders’ half of the frame with a smash that sailed over the centerfield fence, but the rally didn’t catch on and the Raiders eventually took the loss.
Hubbard took the hill for the Raiders over the first 3.2 innings, striking out one batter. Gurley stepped up to the mound in the fourth frame to finish the game. Gurley gained seven strike-outs in the final innings.
Gurley led the Raiders from the plate, contributing a double and a homerun in four at-bats. Barnes, Bell, and Weldon each contributed RBIs. George Wall and Hubbard contributed hits as well.
The Raiders traveled to Albany on March 22 to take on GISA region 3-IAAA foes, the Deerfield-Windsor Knights. The results of this contest were not available at press time.
The Raiders will return to action on April 1, traveling to Perry to face the Westfield Hornets.