Profile: Sherri Harris; From the Rucker Street courts to the State Championship

As a young girl, the Americus-Sumter High School (ASHS) Lady Panther’s head basketball coach, Sherri Harris, seemed to have two choices in life: “I could stay in the house and cook with Grandma, or I could play basketball,” she said. “To me being around sports was an outlet. I was never a cleaning and cooking person like my mom wanted me to be.”
And so, from as young as eight-years-old, Harris followed her older brothers, Darius and James, from the  Northside Drive Housing Projects in Americus, (Brick City), to the Rucker Street Basketball Courts, now known as Boone Park, where she was usually the only girl on the court. In addition, she had to suffer the slings and arrows of also being the shortest player in a big man’s game.
“They called me anything small you could think of,” said the four-foot-eleven inch tall coach. “’Little Bit’, ‘Spud Webb.’”
But if the teasing got to be too much, the guy calling her names would find a tough little girl in his face.
“I used to fight the guys a lot,” Harris said. “I didn’t have any choice.”
From these hardscrabble beginnings, she stuck with basketball and eventually became a Division One basketball player at Alabama State University. Following this milestone, she continued a somewhat idiosyncratic coaching career to fill the very large shoes of former ASHS head coach, Evelyn Wright, and take over the local high school woman’s program. In her first season with the Lady Panthers (2014-15), Harris guided the team to a record of 29-2, losing in the elite-eight round of the state playoffs to Carrollton.
This year, with their 31-1 record, the Lady Panthers defeated basketball powerhouse, the Marist War Eagles, before going on to take down defending state champions, the Buford Wolves. The ASHS girls then went on to face the Veterans High School Warhawks in the State Finals, where they earned a convincing 56-38 victory. 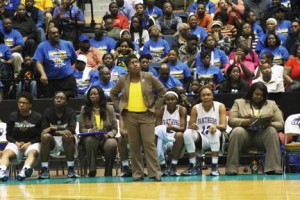 “They were one of the closest knit teams I ever coached,” said Harris, following the historic win. “There wasn’t a lot of bickering. They’d sing together for hours coming back from a road game. It was scary sometimes to see that they actually liked each other, which isn’t always the case with a bunch of teenage girls.”
With a stifling defense and offensive prowess led by senior point guard, A’tyanna Gaulden, this year’s Lady Panthers dismembered most opponents, winning one game against Albany High by an astounding 75 points. Throughout her junior and senior seasons, Gaulden was courted by several division one schools before deciding to attend Florida State.
Harris believes that three or four of her other seniors will play on the next level as well, especially the two honor graduates, Kayla Howard and Amber Hicks, whose good grades will give them even more options.
Although they usually won by a lot, they often could have won by a lot more. Harris used the skill of her first-team players to develop the talent on the bench.
“We could have won several games scoring one-hundred points, but then we wouldn’t be getting better as a team,” she said.
She is particularly proud of her team’s academic standing and the discipline they maintained on and off the court.
“I hold them accountable,” the coach said. “When I receive a discipline notice, I will sit them out for things they do outside the basketball court. But for the most part, my girls are good academic students who don’t cause problems.
Harris’ penchant for strict discipline comes from her mother and grandmother and is a credo by which she lives. That discipline involves knowing limitations.
“Both my mother and grandmother worked hard. They were very strong ladies,” said Harris. “They didn’t give me everything I wanted, but gave me what I needed.”
The coach tries to impart some of what she learned to her students, especially respect for elders: “A lot of time I tell my players and students you don’t always have to be right,” she said. “Sometimes you just have to bite your tongue and say ‘yes sir.’”
The game has changed a great deal since she took to the outdoor courts on days when the weather permitted.
“Now kids play organized basketball year round –AAU Summer ball—and they are so competent and athletic that if you’re not playing year-round, you’re behind,” said Harris. “Very seldom do you see girls out playing on the basketball courts like I did.”
It was a winding road that led Harris back to her home in Americus. She first realized she enjoyed coaching when she worked as a program director for a Boys and Girl’s Club in Montgomery, AL.
“I liked the teaching aspect of it,” she said. “Also, whatever you asked the kids to do, they said ‘Okay.’ They didn’t ask a lot of questions.”
After a short stint coaching basketball at a school that eventually closed, she returned to Americus to take a job as a paraprofessional at Sara Cobb Elementary School. After a year, she went to graduate school at her alma mater, Alabama State University, to get her master’s degree and to get certified in grade school education. While there, she was named an assistant volleyball coach and the coach of the bowling team, despite the fact that she never bowled in her life.
“We had a bowling alley in Americus, but we just played video games there,” she said.
She also was an assistant coach for the ASU women’s basketball team and later became head coach at Stillman College in Tuscaloosa, AL, where she helped transition the program to the SIAC Conference and NCAA Division II status.
More dramatic was the way she turned around a Turner County High School team that, during her first season, had only five players and went 6-20. In just her second year, the team rocketed their way to a 24-7 record under Harris’ guidance.
As for next season’s prospects, Harris  said that the team will graduate eight seniors this year. Still, she is optimistic:
“We’ll be young, but we’ll be very athletic and competitive,” she said. “We return two of our top scorers.”
“Shortly after Spring Break we will be back in the gym working to get back on top,” she said. “I have to get these ladies ready to defend their championship.”

Gurley’s late homer not enough to push Raiders past…