Wildcats’ streak continues as team jumps to 16-2, remains undefeated in 4-A 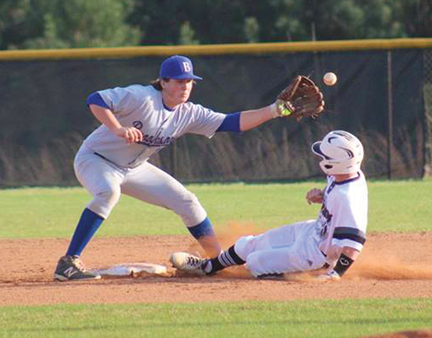 Submitted by Chuck Cheek: Josh Hutchens beats the tag as he slides into third base during the Wildcats’ March 15 contest against Brookwood. Hutchens stole two bases in the match as he led the ‘Cats to the 5-1 win.

The Schley County Wildcats baseball team has been hard at work over the past week continuing to plow their way through competitors, determined to earn themselves back-to-back state championship appearances.
The defending state champions kicked off the action on March 15 with a 5-1 victory over region 4-A foes, the Brookstone Cougars in Ellaville. The ‘Cats traveled to Macon two days later to deal a 9-1 blow to the First Presbyterian Day School (FPD) Vikings.
With the wind at their backs, the Wildcats hit the diamond again on March 18, earning another significant region win (8-2) over Taylor County, dealing the Vikings their second defeat of the season. The Wildcats opened play this week, traveling to Columbus to continue their impressive hot streak with a 16-0 shutout of their hosts, St. Anne-Pacelli. The next afternoon, Schley’s boys hit the road for Hawkinsville to further solidify their reputation as “the team to beat” with a 10-0 win over the Red Devils.
Most recently, the Wildcats went on to defeat Miller County 5-0 0m March 24.
With this series of wins under their belts, the Wildcats currently enjoy a 16-2 overall record and remain undefeated in region 4-A competition after seven contests.
Josh Hutchens and Brett Usry led the ‘Cats in their 5-1 victory over Brookstone on March 15 at Wildcat Park.
Hutchens went 2-3 at the plate, stole two bases, and scored a pair of runs to ignite the Wildcats’ offense in the region match-up. Usry was a dominant force on the mound, allowing only three hits, three walks, and one run while striking out 12 batters in his five innings of work.
Blake Howell was sharp in his two innings of relief. Howell struck out four batters while giving up one lonely hit.
After the Cougars opened the scoring with one run in the top of the first frame, Usry drove in Hutchens in the bottom of the inning to tie the game. The ‘Cats took the lead in the third when Hutchens again scored, this time on an Usry double to left field. The ‘Cats tacked on two more runs in the fourth inning on a a wild pitch, an error, and a Reid Ragsdale RBI single.
Hutchens, Usry, and Howell each connected on two hits in the contest. Chase Patrick, Michael Leeder, and Ragsdale also tallied hits in the game.
On the win, Wildcat head coach, Chuck Cheek, stated, “Brookstone is always a big game for us. [Brookstone pitcher], Drew Webb, was really strong on the mound for them and it was a struggle to score early. Brett [Usry] gave us another great performance. After the first inning, he really dominated. Josh [Hutchens] has the kind of speed that can take over a game. When he’s on base our offense clicks a little better. Ragsdale added a big hit late and we ran the bases well. It takes a lot of little things to beat a team like Brookstone.” 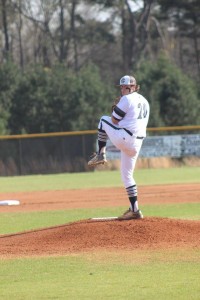 Submitted by Chuck Cheek:
Brett Usry winds up on the mound during the Wildcats’ March 15 contest against Brookstone. Usry struck out 12 batters in five innings on the hill for the Wildcats.

‘Canes kick off homestand with win over MGS, run…