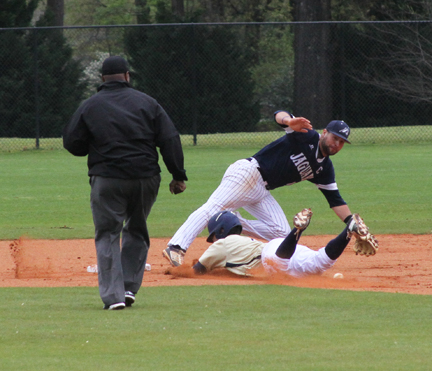 Michael Murray/Americus Times-Recorder: GSW’s Brett Burgess takes advantage of an Augusta throwing error to steal second base during the second inning of the first game of the Hurricanes’ March 26 double-header.

AMERICUS – The Georgia Southwestern State University (GSW) baseball team kicked off the weekend’s competition with a bang, as pitcher, Jordan McIlwain turned in a stellar performance against Augusta University, throwing eight scoreless innings in a March 25 3-1 win in the Peach Belt Conference (PBC) weekend series opener at Hurricane Stadium.
The ‘Canes’ luck soon wore thin, however, as the team was swept in the next afternoon’s double header. Augusta won the opener, 15-2, and pitched a shutout in the finale, 14-0.
The Hurricanes ended the day with an overall record of 17-15 and a mark of 3-15 in the PBC while Augusta rebounded from GSW’s win in the series opener to improve to 20-11 overall, 10-5 in conference play.
In Friday’s match-up, The Hurricanes opened the fifth inning with three consecutive singles and scored the first run of the game when Davey King drove in Zach Barron. A double play and an unsuccessful attempt at a steal shut the door on further damage.
GSW utilized four more singles in the sixth inning to push its lead to 2-0. Barron collected the RBI this time when his single to center field brought home Evan Alderman.
A couple more singles and a walk set the stage for GSW’s final run of the evening as Alex Kranick plated Will Redding with a sacrifice fly to left field.
McIlwain (4-2) exited after the eighth inning, having thrown 102 pitches. He scattered five hits, walked one batter, and struck out three. Mitch Holloway was called upon in the ninth inning to pick up his third save. Holloway walked Clint Hardy to open the inning, allowed Hardy to advance to second on a wild pitch, then surrendered an RBI single to Hunter Boose. Holloway settled in to retire the next three batters and secure the victory.
Augusta starting pitcher, Tristan Jones (5-2), threw four and two-thirds innings, allowing seven hits and one run while striking out two. Casey Lenoch surrendered six hits and two runs in his one and one-third innings on the hill. Jordan Kelly was called upon for one out and Frank Warren covered the final one and one-third.
GSW outfielder, Devyn Newberry, led all batters with three hits. Barron collected two hits along with King and Redding.
Boose, Connor Gilbert and Cole Thompson had two hits apiece for Augusta. Those three batters accounted for all six of the Jaguars hits.
The Hurricanes and Jaguars combined to turn six double plays in the game, each with three. 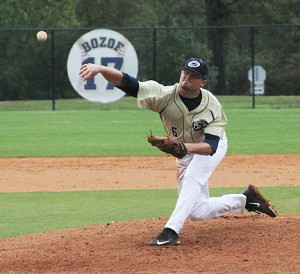 Michael Murray/Americus Times-Recorder:
GSW’s Earl Dupree turns up the heat during the second inning of the first game of the ‘Canes’ March 26 double-header against Augusta University.

The following day, the teams returned to the diamond to continue the series. In the first contest of the afternoon, Augusta scored a run in the second inning and three more in the third to provide all the support Jaguars starting pitcher, Joey Stillwell (5-0), would need.
GSW trailed 9-1 before Augusta put its final stamp on the day’s opening game with a six-run seventh.
Hurricanes’ starting pitcher, Earl Dupree (2-5), exited after the third inning, having surrendered three earned runs. He allowed five hits, gave up two walks, and did not strike out a batter. Matt Hubbard, Michael Ranieri, and Drew Powers divided the final six frames.
Devyn Newberry and Zach Barron contributed two hits apiece for GSW.
Clint Hardy went 4-for-5 with a double, drove in a pair, and scored twice for Augusta. Boose had three hits, four RBIs, and scored twice.
Stillwell threw 89 pitches over six and two-thirds innings, scattered six hits, struck out six batters, and gave up a pair of runs. Chase Stone finished the seventh inning and kept GSW scoreless in the eighth. Zach Lebetter pitched the ninth.
The series closer didn’t see the ‘Canes luck improve.
The Jaguars pushed six runs across in the third inning of the nightcap and never looked back.
Southwestern starting pitcher, Layne Gusler (1-5), walked three in two and one-third innings, including a pair in the third that were compounded with two errors in Augusta’s six-run rally. Chad Adkins followed Gusler for two and two-thirds innings on the hill. Kyle Spinks pitched two frames. Coty Graham threw the eighth and Daniel Perez retired the side in order in the ninth.
Brett Burgess provided the lone offensive highlight for GSW in the finale with his three-for-four performance at the plate. Burgess accounted for all but two of the Hurricanes hits in Game two.
Rau was four-for-five with a double, three RBIs, and two runs scored for Augusta. Jim Wagner, Gage Patton and Jamal Cummings had two hits apiece.
Jaguars starter, Will Thompson (3-2), threw 111 pitches over seven and one-third innings, held GSW to three hits, walked two batters, and struck out four. Aron Chick finished the eighth inning and C.J. Reed handled the ninth.
The Hurricanes will return to action on March 30, taking on Valdosta State in Americus at 5:00 p.m. The team will resume PBC competition on April 1, hosting Columbus State.