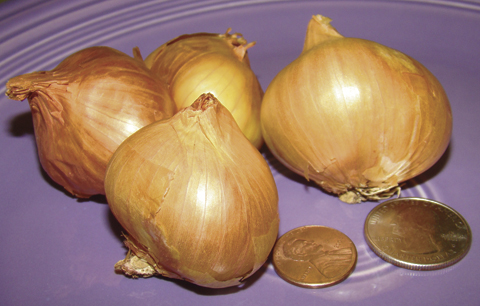 The yellow potato onion is an heirloom variety that is easy to grow, flavorful and that stores well.

Question: What are potato onions? Do they taste like potatoes?
Answer: Potato onions are a type of multiplier onion. They do not taste like potatoes. Their common name may be due to how they multiply from one parent bulb that was planted as potatoes multiply from one planted “seed potato” or piece of potato. Perhaps the name is partially due to how they are usually rounder than shallots, another kind of multiplier onion that is usually more oblong.
Potato onions are noted for their drought tolerance and resistance to diseases and insect pests. They are described as flavorful but not strong. Potato onions are also valued for their keeping quality which can be eight to 12 months or more under good conditions. If you have had trouble growing other onions, you may want to give potato onions a try.

Q: I saved the seed from some delicious muscadines I ate this fall. When should I sow them?
A: If you want a muscadine just like the one you ate, propagate it by layering or by taking cuttings from the parent vine or purchase the variety you want from a muscadine nursery. Named varieties of muscadines do not come true from seed. You will probably get something totally different, and in this case “different” does not usually mean better.
Growing muscadines from seeds can be a fun experiment, however, and a way produce more wild muscadines to plant on your property. Sow them outdoors in the fall or keep the seeds stored in the refrigerator in a sealed plastic bag with a moist paper towel and sow them in the spring.

Q: How soon should beef be cooked after thawing?
A: It depends. If you thawed it in the refrigerator, you don’t have to cook it right away. Ground beef can be stored an additional one to two days before cooking; beef roasts and steaks may be stored three to five additional days before cooking. If beef is thawed in cold water or in a microwave oven, it should be cooked as soon as it is thawed.

Q: Can rohdea be grown as a houseplant?
A: Rohdea (Rohdea japonica) is still a relatively uncommon evergreen perennial, but it is becoming more widely known due to its attractive, dark green, lily-like leaves and its tolerance of heavy shade, sort of like cast-iron plant but smaller and more cold hardy.
Rohdea can also be grown as a houseplant. This may surprise gardeners who are used to seeing it outdoors and remaining evergreen in the coldest temperatures. Most of our houseplants are tropical or subtropical and cannot live outdoors. Rohdea is an exception. It is a non-demanding indoor plant as well as an outdoor one. It will probably never replace spathiphyllum or dracaena because it is harder to propagate, and therefore more expensive.
Because it is slow to multiply, you are unlikely to find rohdea at big box stores. Look for it at specialty nurseries and garden centers that don’t cater to the masses.

Consumer Qs is from the Georgia Department of Agriculture. www.agr.georgia.gov