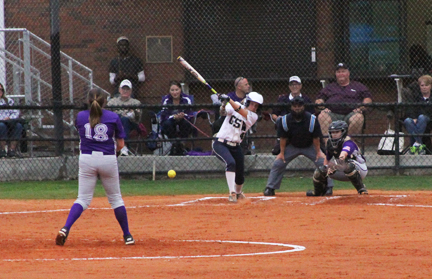 Michael Murray/Americus Times-Recorder: GSW’s Mikela Barlow belts a grounder up the middle during the Lady ‘Canes’ second contest of the afternoon on March 25.

AMERICUS – Number 19-ranked Young Harris College (YHC) won both games against the Georgia Southwestern softball team in a double-header on the afternoon of March 25 at Lady ‘Canes field in Americus.
The YHC Mountain Lions worked towards a 4-0 shutout of the Lady ‘Canes in the series opener before winning the second contest of the afternoon by a 5-6 margin.
The Lady ‘Canes are now 22-20 overall and 6-8 in the Peach Belt Conference (PBC) while YHC improved to 23-9 and 9-3 in the PBC.
In the first match of the afternoon, the Mountain Lions scored one run in the first inning off a walk before slugging a three-run double in the seventh to cinch the win.
GSW finished with three hits, no runs, no RBIs, and two errors.
Brittany Childs (L, 5-6) pitched seven innings, giving up five hits, four runs, and eight walks. Childs struck out four batters in the contest.
In the rematch, the Lady ‘Canes jumped out to an early lead in the first inning when Allee Denney doubled to right-center to plate Hayley Tierce.
GSW scored two more runs in the third. Americus native, Ella Hawkins, scored off a single from Denney and Joshlyn Martin scored off double from Haley Warner. 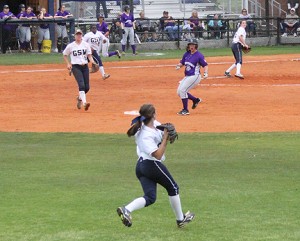 In the top of the fourth, YHC belted a two-run homer to come within one run of GSW’s lead.
Tierce hit a double in the fifth to plate Mikela Barlow and scored off a fielder’s choice to put the Lady ‘Canes ahead by three.
The Mountain Lions hit another two-run homer in the sixth and scored two more in the seventh to win by one.
GSW finished with eight hits, five runs, five RBIs, and two errors.
Haley Goodson (L, 9-10)  pitched six and two-thirds innings, giving up 12 hits, six runs, and one walk. Goodson struck out two YHC batters.
Kaley Sikes pitched one out in the match, giving up no hits and no runs, but walked two batters and struck out none.
The Lady ‘Canes hit the road on March 29 to play a non-conference double-header against Valdosta State. The results of this series were not available at press time.
The Lady Hurricanes will return to action on April 2, hosting PBC opponents, Lander University, at Lady ‘Canes Field in a double-header.