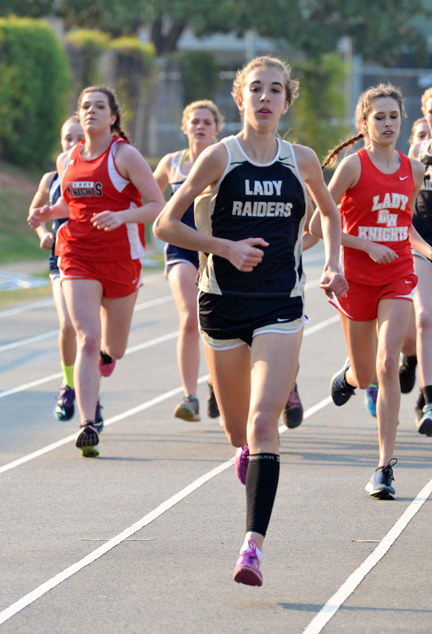 Submitted by Patrick Calcutt: Shown above, Ryleigh Bell turned in a personal-best time of 2:37 to take second place in the 800-meter event at Deerfield-Wndsor on March 23.

ALBANY – The Southland Academy men’s track and field squad was edged by 2015 State runners-up, Deerfield-Windsor, in Albany on March 23 in a seven-team meet featuring six of the seven GISA Region 3AAA schools.
Deerfield-Windsor finished the meet with 175 total points to Southland’s 161, with Westwood following in third place and Brookwood finishing fourth. Tiftarea, Terrell and Citizens Christian of Douglas  finished in the fifth, sixth, and seventh spots, respectively.
Southland’s Wright Calhoun continued his outstanding senior season with a win in the 800-meter event and a personal-best time of 4:34 to win the 1600-meter race.
Other first place finishers for the Raiders were Bennett Carey in the 110 hurdles with a time of 18:12, Ellis Ivey in the 300-meter hurdles with a time of 46:49, Townsend Ray in the 200-meter event which he finished in 24:19, and Billy Calcutt, who bested his opponents in the 400-meter event with a time of 54:15.
Ray also took fourth place in the 100-meter race.
There were many other Raider participants who logged points in the meet.
Jamal Rice took second in the 200-meter race with a time of 24:20 and third in the long jump with a leap spanning 19′ 11.5″. Brody Shattles won second place in the pole vault, clearing 11 feet. Stephen Turton finished second in the disc event, throwing 122′ 8″. Ivey earned the second-place spot in the 110-meter hurdles with a time of 18:21. Carey took third in the 300-meter hurdles with a 48:78 finish. Gray Torbert won third in the 3200-meter race with a time of 12:31. Stephen Taggart took fifth in the shot-put with a 38′ 5″ throw. Josh McKie earned third place in the triple jump, leaping 38′ 1.5”.
Logan Morris took fourth in the pole vault while Brian Miller earned fourth place in the 800-meter race and fifth place in the 1600-meter event. Ridge Roland finished fourth in the 400-meter race with a time of 56:44.
Southland’s relay teams continued to excel at the meet as well. The school’s number-one 4 x 400 team of Calcutt, Miller, Roland, and Calhoun won for the second week in a row, turning in a time of 3:47. The school’s number-two team, consisting of Ivey, McKie, Morris, and Morgan Youngdale took third place in 4:02. Both 4 x 100 teams placed as well. The number-one team of Turton, Clay Owens, Rice, and Ray ran 47:00 to take second place while the number-two team of Calcutt, Youngdale, Alex Roach, and Morris finished right on their heels with a time of 49:08, earning them fifth-place honors.
Southland’s women’s team took a fifth-place overall finish with 53 points, coming in 11 points behind Tiftarea.
Eighth-grader, Ryleigh Bell, led the way again this week, picking up a pair of second-place finishes in the 1600-meter race (6:01) and the 800-meter event (2:37). Bell then anchored the third-place 4 x 400 relay team featuring Alex Exum, Lilli Dickens and Calyn Fort that turned in a time of 4:41.
Exum came in fourth place in the 400-meter individual event. Fort finished fourth in both the 800-meter race (2:44) and 1600-meter race (6:13).
Freshman jumper, Sydney Payne, continued to move up the leader board, clearing 4′ 11″ to take third place honors in the high jump, then switched her attention to the horizontal plane, leaping 14′ 4.75″ to finish second in the long jump. Anna Kate Ivey earned a fifth-place finish in the 100-meter hurdles with a time of 21:41.
Following a well-earned break, the teams will hit the track again on April 6, returning to Albany to participate in the pre-region meet at Deerfield-Windsor.