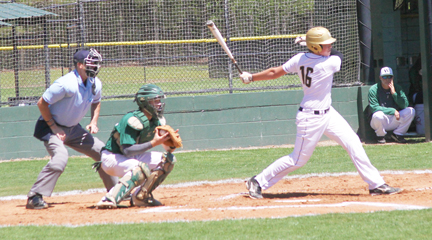 Michael Murray/Americus Times-Recorder: Southland’s Harison Bell takes a powerful swing during the second inning of the Raiders’ first April 2 contest against the Hornets. Bell contributed two home runs to the Raiders’ cause during the match.

The Southland Academy Raiders baseball team hit the diamond following a well-deserved break to take on the Westfield Hornets in a double-header on April 2.
The Raiders returned from their spring break to split the series, taking a 7-6 loss in the opener despite a pair of home runs from first-baseman, Harrison Bell and another from pitcher, Reed Dillard.
Following the defeat, the Raiders dusted themselves off and returned to the field, determined to turn the tables on the visiting Hornets in the afternoon’s closer. After another long, hard-fought battle, the Raiders cinched a 10-9 win, bringing a halt to a six-game skid.
After the series, the Raiders are left with a 3-6 overall record on the season.
Before the team’s break, however, the Raiders hosted Crisp Academy before traveling to Albany to take on region powerhouse, Deerfield-Windsor (D-W). Southland’s boys suffered a narrow 5-4 loss to Crisp Academy before the D-W Knights showed the Raiders why they’re at the top of the region heap by dealing Southland a 13-2 blow.
In a recent interview, Southland head baseball coach, John Brady, praised the team’s efforts in the pre-break matches, saying, “I feel like we let a winner get away in the [Crisp Academy] game… We made some mistakes in the fifth inning. A couple of small mistakes hurt us in that game.”
The Raiders kept up with their visiting opponents, trading points through the first three innings. In the fourth and fifth frames, however, Crisp Academy began to pull ahead, leaving the Raiders to catch up, which the team nearly did with a seventh-inning home run off the bat of pitcher, Hoyt Gurley. Gurley also pitched three and one-third innings in the contest, gaining seven strike-outs.
Gurley was also a major contributor in the Raiders’ March 22 contest against Deerfield-Windsor. According to Brady, the Raiders’ batters swung better in the follow-up match, with only four batters striking out. “We hit some balls hard, but a lot of them were right at [Deerfield’s defenders],” he said.
The Knights took advantage of a series of slight mistakes in the second frame to gain an early lead, however, and never looked back. “If you make mistakes against a team like Deerfield, you’re going to get beaten,” Brady said. “You’ve really got to control those guys at the bottom of the batting order because the top of their line-up is so good… Offensively, we did much better. I felt like we put a lot of good swings on the ball…”
Gurley blasted another home run in this match, bringing in Dillard to contribute two RBIS. Parker Weldon and Stephen Barnes each batted one for two in the contest.
As the Raiders returned to the field to take on Westfield on April 2, the well-rested baseball team showed up ready to battle.
The Hornets built a two-run pad in the initial frame of the opener before Dillard brought the Raiders into the dugout with back-to-back strike-outs.
“Reed [Dillard] and Hoyt [Gurley] both settled in and pitched nicely after some early struggles,” Brady said. Dillard opened the game for the Raiders, striking out seven batters in three innings. Gurley took up pitching duties in the fourth stanza, striking out four batters before the end of the game.
Bell highlighted the match, blasting home runs for the Raiders in both the third and seventh innings. “He had a big day at the plate,” Brady said. Dillard followed Bells’ first dinger with one of his own.
Bell brought in four RBIs in the contest while Dillard contributed the other two as well as one stolen base. Eighth-grader, Hunter McCain contributed a hit as well and crossed the plate twice.
“In the seventh inning, we made some mistakes that hurt us,” Brady said. The Hornets’ final three runs were all unearned.
Following the early defeat, the teams kicked off the second match of the afternoon, in which the Raiders gained a 10-9 defeat over the Hornets.
Bell was the winning pitcher in the second contest of the afternoon, pitching four and two-thirds innings. Brady said that, similarly to the opening game, the Raiders’ pitching in the second match got off to a slow start. “After [Bell] settled in, he just did a great job,” Brady stated. “He found his groove and just went for it, changing speeds and doing what needed to be done… He had a monster day”
Brady went on to say praise the team’s defense in that match, saying that , though Bell only gained three strike-outs, the team efficiently dispatched prospective runners who had connected with the ball from the field. 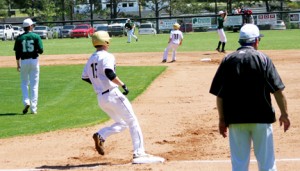 Michael Murray/Americus Times-Recorder:
Southland Academy’s Reed Dillard (15) makes good on a base hit as Will Hubbard (11) rounds second base during the first inning of the Raiders’ opening match against Westfield on April 2.

Southland’s Will Hubbard pitched the final two frames of the match.
“I’m really proud of those guys,” Brady told the Times-Recorder. They pitched well for us in that second game.”
Hubbard brought in a pair of RBIs on his sole hit of the contest, while Bell batted two for three, adding three more RBIs. McCain connected on all three of his at-bats, crossing the plate each time with the help of two stolen bases. Dillard crossed the plate once and Gurley brought in one RBI. Parker Weldon contributed the final hit for the Raiders, bringing in a runner on a double. Weldon went on to score one run.
“That was a good win, after losing a disappointing game in the first one,” Brady said. “We had a bunch of young guys step up and do really well for us… Overall, we played really good baseball Saturday… I think we did a lot of things that will help us get better.”
The Raiders hosted the Terrell Academy Eagles on April 5. The results of this contest were not available at press time. Southland’s boys will return to the diamond on April 8 to take on the Brookwood Warriors.

Knights of Columbus golf tourney to be held May…