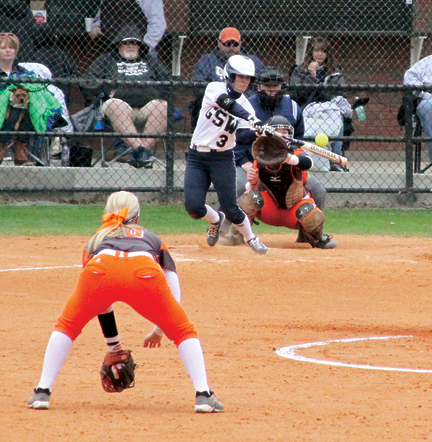 Michael Murray/Americus Times-Recorder: GSW’s Erin Steele connects on a hit during a mid-season contest in Americus. Steele batted in the tying run in the Lady ‘Canes’ victory over UNCA.

AMERICUS – A five run rally in the fifth inning of game two assisted the Georgia Southwestern State University (GSW) softball team in a split with the USC Aiken (USCA) Lady Pacers on April 3 at Lady ‘Canes Field on Senior day.
GSW’s comeback broke their eight-game losing streak, which dropped the team to 23-25 overall and 7-11 in the Peach Belt Conference (PBC) while USC Aiken moved to 23-11 overall and 7-5 in the PBC.
The Lady ‘Canes dropped a 2-0 decision to USCA in the opening match of the series before besting the Lady Pacers in the nightcap 6-5.
The first contest of the afternoon went scoreless until USCA pushed two runners across the plate in the sixth inning off a two-run single.
The Lady Pacers went on to hold off GSW’s offense and earn the shut out.
GSW finished with one hit, no runs, no RBIs and no errors.
Haley Goodson (L, 9-11) pitched seven innings, gaving up six hits and two runs. Goodso struck out four batters.
Determined not to allow the defeat to keep them down for long, the Lady ‘Canes stepped up their game in the latter half of the second match of the afternoon.
USCA started the game with a double and followed it up with a two-run homer. They had a solo home run in the second and another two-run homer in the third to jump to an early 5-0 lead.
The GSW ladies started to rally in the fifth inning, sparked by a single to left field that plated Ella Hawkins. Savannah Carlisle proceeded to slug another single to bring in Mikela Barlow and scored off a throwing error along with Goodson. Erin Steele then singled to short stop to plate Haley Warner and tie the game.
With two outs and the game tied, Carlisle stepped back up to bat in the bottom of the sixth and hit a single to center field to bring in Hawkins and cinch the come-back victory.
GSW finished with 13 hits, six runs, six RBIs, and two errors.
Goodson pitched two innings giving up five hits and three runs. Goodson did not strike out any batters or give up any free bases.
Brittany Childs (W, 6-7) is credited with the win after pitching five innings. Childs gave up four hits and two runs. Childs walked none and struck out two batters.
The Lady ‘Canes recognized their three seniors (Savannah Carlisle, Haley Goodson and Erin Steele) in between the games.
The GSW ladies hit the road on April 8 to play a conference doubleheader against Georgia College starting at 4:00 p.m.