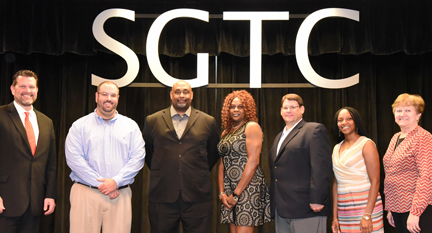 AMERICUS – “If you love something, give it your all. Don’t make excuses. An excuse is a reason to be weak. Be strong. Work hard and move on.” That was the message that Wichita State assistant women’s basketball coach, Bridgette Gordon, shared with the South Georgia Technical College (SGTC) Jets and Lady Jets at the school’s basketball recognition and awards banquet in the John M. Pope Industrial Technology Center recently. Gordon received a standing ovation at the close of her speech.
In her speech, Gordon gave an overview of her life that has resulted in tremendous accomplishments. Her dream began when she was a 5’10” fifth grader who was teased for being an Amazon. “My goal in the fifth grade was to play in the Olympics. At that time there was not a professional women’s basketball league, the Olympics were as high as you could go. Playing in the Olympics was my goal, no matter what it took, I was willing to work hard to accomplish that goal,” she said.
Gordon accomplished that and much more.
She went on to discuss her impressive career with the captivated audience. Gordon distinguished herself as an outstanding basketball player at the University of Tennessee where she played for legendary coach, Pat Summitt. She led the Vols to their first national championship, was named the Final Four Most Outstanding Player in 1989, and was voted to the Final Four All-Tournament team in 1987 as well as 1989. She was a first-team All-Southeastern Conference performer all four years and earned SEC Player of the Year honors in 1989. She did go on to win the gold medal in 1988 with the USA Olympic women’s basketball team in Seoul, South Korea.
Gordon went on to play professional basketball in Italy, helping lead her team to the Italian League Championship for six years straight and was an All-star player each year. She also played with the Sacramento Monarchs in the Women’s National Basketball Association’s (WNBA) inaugural season, appeared on the cover of the Wheaties box, worked as a television broadcaster, a WNBA scout, and as an assistant basketball coach at the collegiate level. She was inducted into the Tennessee lady Volunteers Athletics Hall of Fame in 2001 and the Basketball Hall of Fame in 2007.
Today, Gordon is still a competitor. “I hate losing more than I love winning,” she said. “I have been very privileged and it is all because of an orange basketball. Coach Summitt took a chance on me and I am where I am today because of that. I cannot thank her enough for that.”
“Basketball has given me so much. That is why I want to give back. That’s why I coach,” Gordon told the crowd. “Tomorrow is not promised. Thank the people who have helped you become you. Pat Summitt never told me I had arrived. She didn’t want me to become complacent… You are who you are. Work hard, and move on. Don’t point fingers. Work hard for your dreams.”
Former 2014-2015 South Georgia Tech women’s basketball standout and NJCAA All-American Honorable mention, TaQuandra Mike, is a member of the Wichita State Lady Shockers and had the privilege of playing for Gordon. Mike is expected to be a leader on that team as a senior next season.
Following the talk by Gordon, SGTC athletic director and Lady Jets head coach, James Frey, thanked the Booster Club, the players, their parents, the supporters, and the SGTC faculty, staff, and administrators for their support. “Every little thing that someone does for this program, we count as a big thing. It takes all of us working together to make this work. When we recruit players, we want three things. We want them to graduate, to be a good community member and we want them to perform on the floor as Jets and Lady Jets. We don’t take just anyone. We want people of character that will not embarrass our college, our faculty or our administration,” said Frey.
Frey also thanked Lady Jets assistant coach, Kenzia Conyers; Jets head coach, Travis Garrett; Jets assistant coach, Chris Ballauer; and his athletic assistant, Terrie Battle, for their support and hard work this season.
First year Jets head coach, Travis Garrett, and his team finished the season at 15–16 overall. They lost those 16 games by an average of 6.5 points and led in every game this year. We were close in all those games and we are committing to work hard to improve on that season next year,” Garrett said”
Garrett presented freshman, Rico Simmons, with his MVP award for the Jets for the 2015-2016 season.  Simmons and freshman, Pat Welch, will be representing the freshman in an All-Star game on April 9 at Central Georgia Tech. Sophomores, Demario Beck and Clarence Smith, will also participate in the sophomore All-Star game at Central Georgia Tech on April 9. 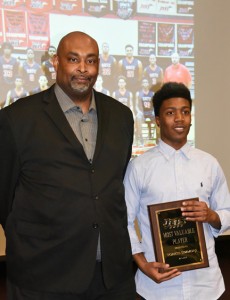 Submitted by SGTC:
Travis Garrett, head coach of the Jets is shown above after presenting an award to Rico Simmons, MVP for 2015 -16 Jets.

Frey then presented sophomore, Brittney Delva, with the MVP award for the Lady Jets, who recently finished the season 27–6 and 14–2 in the conference. “She lays it all out of the floor every night. She has been a better extension of me on the court for the past two years. We could have won 20 games without any one player this season, except for Brittney and that’s why she is our MVP.” 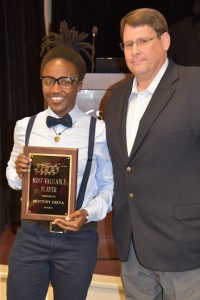 Frey went on to add, “We were one basket short of realizing our goals for this season. For several days, those 27 wins didn’t seem to matter but that is an amazing accomplishment and these girls have a lot to be proud of. They displayed hard work, determination and dedication. If you don’t have those things, you don’t get to be a Division I player. We have Division I and even professional player potential here tonight, but you get there by working as Coach Gordon just said. Do what it takes to get there. You have been given a gift, don’t waste it.”