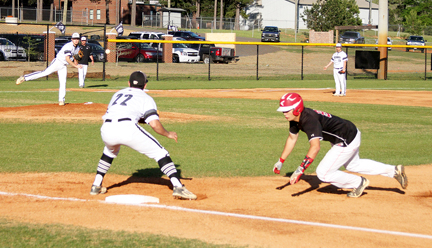 Michael Murray/Americus Times-Recorder: A Marion runner scrambles back to the bag in a pick-off attempt between Schley pitcher, Blake Howell, and first baseman, Michael Leeder. Leeder led the ‘Cats from the plate in the win as Howell gained eight strike-outs for the team.

ELLAVILLE – It was another huge day for the Schley County Wildcats baseball team as the squad exploded in the fourth inning on April 5 to extend their winning streak to eight games after their match-up against Marion County.
The Wildcats earned a 10-0 shutout over the visiting Eagles in that contest, bumping he team’s impressive overall record to 17-2 on the season. The Wildcats currently enjoy an undefeated record in region 4-A competition after eight matches.
The Wildcats’ first home match after several weeks on the road got off to a fiery start as Schley pitcher, Blake Howell, and the team’s defense quickly dispatched Marion’s prospective runners. The Bulldogs responded in kind in the bottom of the initial frame after giving up a single to Schley first baseman, Michael Leeder.
It was three up, three down over the next two innings for the Marion crew as their batters stepped to the plate, only to return immediately to the benches. The ‘Cats scattered two hits in the bottom of the second off the bats of Howell and Will Barry, but were unable to push runners across the plate.
Schley’s boys opened the scoring in the bottom of the third stanza, with Josh Hutchens leading off with a double deep into center field. A sacrifice fly from Leeder quickly put Hutchens in striking distance. Brett Usry then drew a walk before Hutchens saw the chance to make a break for home on a passed ball and put the ‘Cats ahead 1-0.
It was the fourth frame that saw the Wildcats go unleashed, however, as the Schley crew went on to exploit a series of Marion errors to build up a 5-0 pad before relinquishing the plate. Barry reached on a dropped grounder to spark the rally, and was then pushed to second by Wade Law. Reid Ragsdale offered up a sacrifice bunt that turned into a single as it was dropped by Marion’s pitcher, loading the bases for the ‘Cats.
Leeder knocked a sacrifice fly to right center to plate Barry before Usry slugged a double to the fences, allowing Law and Ragsdale to come in.
The Wildcats weren’t finished, however, as Clint Sellars slugged a single to right field, plating Usry and giving the ‘Cats a 5-0 advantage. 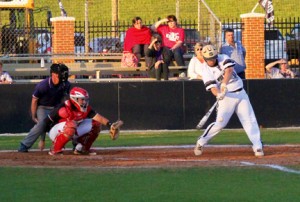 Michael Murray/Americus Times-Recorder:
Schley’s Clint Sellars belts a single to bring in the Wildcats’ fifth run of the April 5 contest against Marion County. Sellars contributed a pair of hits to the Schley victory.

The top of the fifth didn’t fare much better for Marion’s batters, as their attempts at a comeback were squashed by a trio of strike-outs by Howell.
Barry, once again, reached on an error to open the bottom of the frame before heading to second base on an errant pick-off attempt. Law and Ragsdale each drew walks to load the bases before a sacrifice fly from Hutchens gave Barry the chance to come barreling home. Leeder followed with a double deep into center field that advanced Law and Ragsdale to the plate, leaving the ‘Cats up 8-0.
Leeder took the mound for the ‘Cats in the top of the sixth, facing five batters before Schley returned to the plate.
Sellars opened the game’s final inning with a hard double to left center before heading to third as Patrick grounded out. Jesse Wilson stepped up to the plate for Schley and drew a walk before Barry was hit by a wild pitch, loading the bases. Jarrod Wall then stepped up to the plate and drew a walk, plating Sellars to add one more to the ‘Cats’ tally. Ragsdale cinched the victory with a hard fly to center field that brought in Wilson for the walk-off run.
Howell is credited with the win for the Wildcats, pitching the initial five innings of the match. Howell faced 17 batters in his work on the mound, striking out eight. Howell gave up one hit and one walk.
Leeder wrapped up the final inning for the ‘Cats and led the team from the plate as well. Leeder collected two hits in the match, including one double while bringing in three RBIs. Sellars connected on a pair of hits, including a double, and batted in one run.
Hutchens and Usry each contributed doubles, with Usry adding two RBIs and Hutchens adding one. Howell and Ragsdale contributed singles to the Wildcat cause.
The pace was set for Marion by JJ Fuller, who connected on the Bulldogs’ sole hit of the match. Marion pitcher, Ryan Howard, is charged with the loss, having pitched four and one-third innings and struck out two batters.
Following the victory, Wildcat head coach, Chuck Cheek told the Times-Recorder, “Every region win is a big win for us. Their pitcher did a nice job of keeping us off balance the first couple of innings. We have to do a better job of being more consistent at the plate throughout the game. We are kind of relying on the ‘big inning’ right now –  it’s great that we get them, but we need to have more scoring chances early in the game as well.”
“Blake [Howell] was outstanding on the mound,” Cheek continued. He didn’t give up his first hit until the fifth inning… He has great command and really knows how to pitch.”
The Wildcats hit the diamond once more this week for a region 4-A match-up against the Brookstone Cougars in Columbus on April 8. The results of this contest were not available at press time.
The ‘Cats return to action on April 9 in Ellaville, hosting the Baconton Charter School Blazers. Schley will resume region play on April 12 in Ellaville, hosting Taylor County.

From STAFF REPORTS AMERICUS – “If you love something, give it your all. Don’t make excuses. An excuse is a... read more