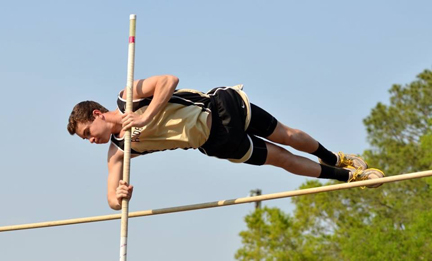 ALBANY – The Southland Academy men’s track team traveled to Albany on April 6 to compete against several region 3-IAAA schools at Deerfield-Windsor School (D-W). The Raiders’ participants won 10 out of 16 events at the competition, eventually earning a second-place finish behind their hosts, the D-W Knights.
D-W walked away with 132 points in the meet, while Southland followed close behind with 119. Brookwood School accumulated 54 points while Valwood earned 27. Citizens Christian brought up the rear with one point.
The Raiders saw several of their athletes display impressive feats of strength, speed, endurance, and agility at the meet.
In the field events, Stephen Taggart won the shot put with a throw spanning 39′ 9”.  Stephen Turton won the disc event with a toss that landed 122′ 11″ downfield. Brody Shattles won the pole vault, clearing 11′ 6″ on his leap.  Logan Morris finished fourth in the pole vault, clearing 9′ 6” in his attempt.
Southland won both hurdles events with Bennett Carey making his way over the 110-meter hurdles with a time of 17:96. Ellis Ivey conquered the 300-meter intermediate hurdles with a time of 46:59. The Raiders won the 200-meter event behind Townsend Ray’s time of 24:40. Billy Calcutt defeated his opponents in the 400-meter event with a run of 54:81. The Raiders’ foes in the 800 and 1600-meter races were vanquished on the strength of Wright Calhoun’s marks of 2:04 and 4:38, respectively.
The number-one 4 x 400 relay team remained undefeated in GISA competition, with Calcutt, Brian Miller, Ridge Roland and Calhoun turning in a time of 3:49. Gray Torbert took second in the 3200-meter race, finishing in 12:23.
Josh McKie earned third-place honors in the triple-jump with a trio of leaps spanning 37′ 5.5″. Jamal Rice contributed a second-place finish for the Raider cause in the long jump with a mark of 19’ exactly.
Taggart finished third in the disc with a throw of 116′ 10″. Carey came in fourth place in the 300-meter hurdles with a time of 48:81. Ridge Roland took fourth place in the open 400-meter race, finishing in 57:53; Ellis Ivey finished second in the 110-meter hurdles in 18:59.
In the relays, the 4 x 100 team of Rice, Clay Owens, Turton, and Ray finished third with a time of 47:08 and the number two 4 x 400 team improved again, this time with a combination of Ivey, Morris, Ray, and Morgan Youngdale running 4:01 to take third place.
In the Women’s races, the Lady Raiders finished third behind D-W, who dominated the competition. The D-W ladies tallied up 172 points in the match. Citizens Christian trailed with 68 points while the Lady Raiders followed close behind with 55. Brookwood collected 19 points and Valwood brought up the rear with 10.
Sydney Payne was a double winner for the Lady Raiders, taking the high jump event with a mark of 4′ 11″ and the long jump with a horizontal leap of 15′ 0.5″.
Olivia Perry came in second place in the shot put and fourth in the disc with throws spanning 24’ 9” and 59’ 2”, respectively. Kaleigh Hernandez earned fifth place in the long jump, clearing 13′ 7″ and Jordan Sanders placed fifth in the triple jump, spanning 24′ 10″.
Alex Exum became the first women’s pole vaulter in Southland history, clearing 6′ 1″. Exum also landed a fifth-place finish and led off the second-place 4 x 400 relay team that included Ryleigh Bell, Lilli Dickens and Calyn Fort. The team finished with a mark of 4:45.
Dickens took fourth place in the open 400-meter event with a time of 68.87.  Bell took second in the 800-meter event, finishing in 2:42 before earning third place in the 1600-meter race with her 5:59 time. Fort finished fourth in the 800-meter race in 2:44 as well as in the 1600-meter jaunt, wrapping up the race in 6:07. Anna Kate Ivey worked for a fourth-place finish in the 100-meter hurdles, completing the race in 20:62.
Next up for the Raiders and Lady Raiders is a an April 13 competition at Hugh Mills Stadium in Albany, where the top two Raiders in each event and the top two relay teams will compete for the team championship and a chance to qualify for the state tournament.

Hurricanes wrap up week with one win, one loss on home diamond