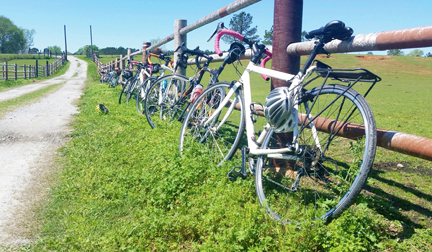 The fourth annual Tour de Farm event, sponsored by Sumter Cycling and the River Valley River Commission (RVRC) was an absolute success, according to regional community and bicycle-pedestrian organizer, Julio Portillo of the RVRC in a recent press release.
“Although we only had approximately 20 riders, the support from local communities and leaders was tremendous,” Portillo said. “We welcomed close to 70 individuals from Columbus, Americus, Harris County, Bluffton and LaGrange at the annual ‘Meat and Greet’ event, which is one of the most popular components of Tour de Farm.”
Although the weather on the opening day of the event, April 1, did not allow for participants to camp in Columbus as originally planned, the weather was perfect through the remainder of the weekend as participants cycled over 100 miles, stopping to tour various interesting agri-tourism destinations along the route.
The event began with a small breakfast at the RVRC offices in Columbus, followed by a visit to the Market Days on Broadway in Uptown Columbus. The group then went on to visit an up-and coming farm-to-table restaurant named Nonic in the same neighborhood. The ride then continued to Begin Again Farms in Ellerslie, GA. The farm rehabilitates abused and abandoned horses.
After a quick lunch at this farm, participants rode the last 30 miles towards Hamilton and into FD Roosevelt State Park, near Warm Springs. 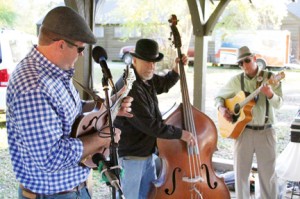 Michael Murray/Americus Times-Recorder:
Participants at the Tour de Farm’s ‘Meat and Greet’ were treated to a live performance by Americus-based bluegrass-fusion trio, the Plucktones, on April 2 at FD Roosevelt State Park.

At the state park, participants enjoyed a comfortable bed at one of their many cabins along with warm showers and a beautiful view of the Pine Mountain Valley. In the late afternoon, Maltitude Craft Beers and Fine Wine from Columbus hosted a happy hour, showcasing a variety of Georgia-brewed craft beverages. Live music was provided during the festivities by Americus-based bluegrass-fusion trio, the Plucktones, and dinner was catered by White Oak Pastures, a multi-generational farm in Bluffton that specializes in grass-fed livestock raised using traditional sustainable methods. The dinner consisted of herb roasted chicken, rosemary potatoes, rice, and mustard greens. 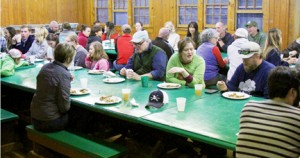 The final morning after a quick breakfast, participants rode to Jenny Jack farms in Pine Mountain as well as Little Bit Farms in Whitesville. After the final farm visit, participants rode back to Columbus via state route 219 and were treated to a ride down a portion of the Columbus Riverwalk.
Originally begun as a collaboration between local coffee roaster, Cafe Campesino, and Sumter Cycling, the Tour de Farm event serves as a means to showcase and increase agri-tourism in the River Valley region as well as to demonstrate how easy and fun it can be to visit interesting places around Georgia by bicycle.