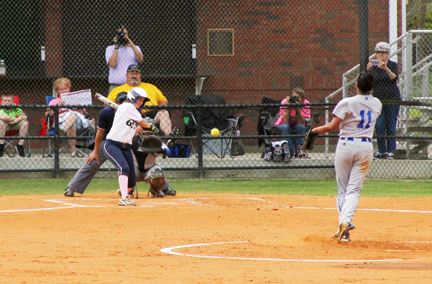 Michael Murray/Americus Times-Recorder: GSW’s Mikela Barlow winds up to add another hit to her record-breaking tally during the Lady ‘Canes’ April 11 contest against ASU in Americus. Barlow broke the GSW hit record on April 8 with 56 connections on the season.

MILLEDGEVILLE – Mikela Barlow broke the Georgia Southwestern State University (GSW) softball NCAA-era record for most hits in a season in the Lady ‘Canes’ double-header loss to Georgia College (GC) on April 8 in Milledgeville.
Barlow belted her 57th hit of the season in game two to surpass the previous record of 56 hits, held in a tie by Mason Moreland (2013) and Nichole Griffin (2011).
Game one saw another broken record when freshman, Hayley Tierce, re-broke the GSW season home run record with her 16th homer.
Despite these record-shattering performances, the Lady Hurricanes were bested in both games of the series. GSW dropped a 9-3 decision in the opener before returning to the diamond to be dealt a 10-2 defeat.
The Lady ‘Canes returned to the comfort of their home field on April 11 to take on Albany State University (ASU) in a double-header. ASU earned an up-and-down win in the first match of the series and the Lady ‘Canes returned the favor in game two, with sophomore, Allee Dennee, belting a two-run walk off homerun in the final frame to cinch the victory for GSW.
As a result of the recent action-packed match-ups, GSW now holds a 24-28 overall record on the 2016 season.
GC pushed six runners across the plate in the third frame of the opening match on April 8, digging a hole that the Lady ‘Cames would struggle to claw their way out of for the remainder of the contest.
Tierce hit her homer in the top of the fourth to put the Lady ‘Canes on the score board, but a few GSW errors helped the Bobcats score three more runs in bottom of the stanza. GC never looked back, eventually sentencing the Lady ‘Canes to the six-point loss.
GSW finished with four hits, three runs, three RBIs and two errors.
GC kept up this momentum in the second contest of the afternoon. Once again, the Bobcats developed an early lead in a rally that the Lady ‘Canes defense managed to shut down with a double play by Tierce, unassisted to Denney for the tag.
In the third frame, Barlow scored off a single from Joshlyn Martin. Tierce scored GSW’s second and final run of the game off a single from Denney. GC continued to push forward, eventually earning the victory.
GSW finished with six hits, two runs, two RBIs and one error.
On April 11, GSW matched ASU point for point in the opener as Ella Hawkins walked to start the bottom of the first and scored off a single from Tierce. Tierce went on to cross the plate off a single from Haley Goodson. Joshlyn Martin scored GSW’s third run to tie the game off a single from Lacy Striblin.
Hawkins cam in again in the bottom of the second to take a one-run lead but Albany State pushed four across the plate in the third to take it back.
In the third frame, Barlow extended her GSW season hits and doubles record with one swing, plating Hawkins and scoring herself off a single from Goodson. Graysen Sanders scored another in the third off a single from Tierce.
A lone home run at the top of the sixth gave Albany State a one-run lead and the win after they held off GSW from scoring in the last two innings.
GSW finished with 16 hits, seven runs, seven RBIs and one error.
The final match of the afternoon went scoreless until Martin hit a double to right field to plate Tierce. ASU tied the game in the sixth with a double to right-center. Martin started the seventh with a single and scored off Denney’s home run to win the game.
GSW finished with five hits, three runs, three RBIs and no errors.
The Lady ‘Canes are away on April 16 to play a conference double-header against Armstrong State starting at 1:00 p.m.