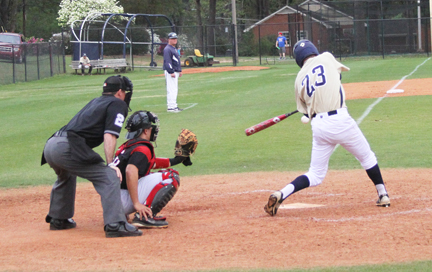 Michael Murray/Americus Times-Recorder: GSW’s Evan Alderman takes a powerful swing during late March match-up in Americus. Alderman led the ‘Canes from the plate, hitting 5-for-5 in the team’s April 12 victory over Tuskegee.

MONTGOMERY – Outfielder, Evan Alderman, went a perfect five-for-five at the plate on April 12 to lead the Georgia Southwestern baseball team past Tuskegee University, 12-4, at Paterson Field.
Alderman, ranked second in the country in walks in the latest NCAA Division II stats report, added a free pass to go with his double, four singles and three RBIs.
GSW ran its non-conference record to 16-2 this spring and overall mark to 19-20, while Tuskegee fell to 9-21.
After spotting the Golden Tigers a 2-0 lead in the first inning, GSW pushed across its first run in the second when Zach Barron scored from third on a wild pitch.
GSW has allowed two or more runs in the opening two innings of its last seven games.
A two-run double down the left-field line by Brett Burgess in the third highlighted a four-run frame and put the Hurricanes ahead for good. Nick Fonseca drove home Burgess on the next at bat with a single up the middle. Barron picked up an RBI earlier in the inning off a sacrifice fly.
GSW added single runs in the fourth, sixth and seventh innings before capitalizing on three Tuskegee errors in the ninth to finish off the Golden Tigers with a four-run finale. Fonseca added another RBI and Alderman belted an RBI double in the ninth.
Fonseca finished three-for-five at the plate with three RBIs and one run scored. Burgess connected on two hits and brought in two RBIs. Dakota Long had a hit, was walked twice, and scored twice.
Matthew Reed led Tuskegee at the plate with three hits. Alexander Henderson added two hits and a pair of RBIs for the Golden Tigers. 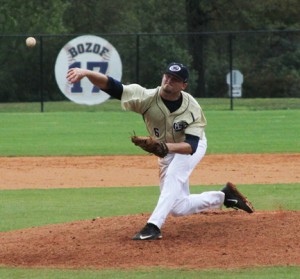 Michael Murray/Americus Times-Recorder:
GSW’s Earl Dupree pitches in a late March contest in Americus. Dupree was one of nine different hurlers to take the mound for the ‘Canes’ during the April 12 match in Tuskegee.

Having been off for six days, GSW utilized the opportunity to get shake off any rust and get as many members of its pitching staff as possible some time on the mound. The Hurricanes used nine different hurlers in the game, with each throwing one inning. Reliever, Earl Dupree (3-5), picked up the win by striking out all three of the batters he faced. As a team, the Hurricanes fanned 11 batters in the ballgame. Kyle Spinks, Dylan Brown, Jarrod Crum, Matt Hubbard, and Mitch Holloway joined Dupree by retiring the Golden Tigers in order during their respective inning on the hill.
Tuskegee starting pitcher, Daniel Croom (1-3), tossed four innings, allowed six earned runs and six hits while walking five batters and striking out two. Desmond Jones surrendered one run in two innings. Clayton Crews was tagged for the final five GSW runs, although only one was earned, over three innings.
The Hurricanes returned to Americus on April 15 for game one of a weekend series against Flagler College. The results of this contest were not available at press time. The series will continue of April 16, with matches beginning at 1:00 p.m. and 4:00 p.m.
The ‘Canes will return to the field for their final home game of the season on April 20 against Albany State. That match is scheduled to begin at 5:00 p.m.

From STAFF REPORTS The Schley County Wildcats baseball team has continued their impressive streak on the diamond, ringing in yet... read more