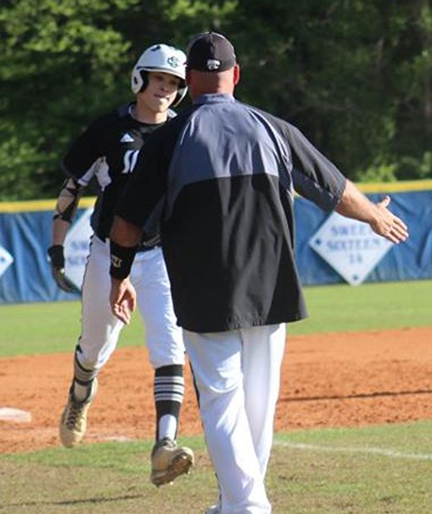 Submitted by Chuck Cheek: Wildcat head coach, Chuck Cheek, congratulates Will Barry as he rounds third base after hitting his second homerun of the day in the ‘Cats’ match-up against Brookstone on April 8.

The Schley County Wildcats baseball team has continued their impressive streak on the diamond, ringing in yet another series of victories to cinch the region 4-A title and bring the team’s overall record to 20-2. The ‘Cats are currently undefeated in region competition after 10 contests.
Schley’s boys opened the series of matches with an 8-4 win over the Brookstone Cougars on April 8 before taking on the Baconton Charter School Blazers the next afternoon. The Wildcats bested the Blazers 10-2.
To wrap up the series, the ‘Cats hosted the Taylor County Vikings on April 12, earning a 6-3 win in the match.
When facing Brookstone, the Wildcats knew that the results of that match would go a long way in determining this year’s region champion.
The Cats sent Brett Usry to the mound to battle Brookstone’s left-handed pitcher, Culver Nored.
Brookstone took an early 1-0 lead and carried it into the third inning. Schley answered with a trio of runs in the top of the same frame. With two Schley runners on base, Chase Patrick knocked the ball deep into left field, scoring Michael Leeder. Blake Howell followed with an RBI single to center field, plating Clint Sellars and Patrick.
The Wildcats tacked on another run in the top of the fourth inning on a sacrifice fly off the bat of Sellars that plated Leeder.
Brookstone staged their comeback later in the fourth frame, tying the game. The Cougars scored three runs on two errors and an infield single to knot things and leave the score 4-4.
Will Barry stepped up for the ‘Cats and changed the game with his next two at-bats. With one out in the fifth inning, Barry hit a solo homerun over the left field fence to give the ‘Cats a 5-4 lead.
In the top of the seventh inning, Barry came to the plate again, this time with a runner on first and belted his second homerun of the game to left center, putting Schley up 7-4. Reid Ragsdale then followed with a solo homerun of his own to right field, leaving the score 8-4 at the game’s conclusion
Patrick entered in relief with one out in the fifth inning. Patrick recorded all five outs via strikes to earn the save.
On the victory, Wildcat head coach, Chuck Cheek told the Times-Recorder, “This was a huge game for us. Playing at Brookstone is always tough. They are very well coached and have a ton of talent. They are a little young this year, but they’ve really improved from earlier in the season.  I’m really proud of how our guys battled after they tied the game. We had a little mental lapse and made a couple of errors, but we didn’t get down.  Will [Barry] had two huge at bats for us. Brett [Usry] was outstanding on the mound. He had all of his pitches working and made some awesome pitches in a couple of key situations. Chase [Patrick] came in in the bottom of the sixth, when we got in a little trouble and absolutely slammed the door. I’m proud of how the guys played.”
The following afternoon, Schley hosted Baconton Charter and won what Cheek describes as “an ugly game”.
The Wildcats managed only two hits on the contest, both off the bat of senior, Josh Hutchens. Schley took advantage of nine Blazer walks and four errors to win the game 10-2.
Leeder picked up the win for the ‘Cats pitching three and two-thirds innings. Blake Howell finished the game on the mound.
“We sure didn’t play well,” Cheek stated after the game. “Both teams had a hard time finding the strike zone early. We were all aggravated with only getting two hits, especially after the way we played in Columbus [on April 8].  We couldn’t get in any sort of rhythm at the plate. We left a ton of guys on base. Thankfully, Josh [Hutchens] had two big hits for us including a hustle double and a few RBIs to get us over the hump. We didn’t strike out during the game but had a lot of pop ups and weak swings. We have to do a little better than that to get where we want to go.”
From there, the Wildcats knew that they needed only one more region win to cinch the region 4-A title.
On April 12, the ‘Cats got their chance as they hosted Taylor County. The Wildcats built up an early lead, scoring five runs over the opening two frames of the match, and never looked back.
Patrick is credited with the win, pitching five innings in the contest and striking out five batters. Howell took over throwing duties in the sixth inning, gaining four strike outs in his two innings of work.
Josh Hutchens and Ragsdale led the Wildcats from the plate, each contributing two of the ‘Cats’ seven total hits. Will Barry brought in two RBIs for the Wildcats and Hutchens brought in one.
The Wildcats returned to the diamond on April 15 to defend their record against the Hawkinsville Red Devils. The results of this contest were not available at press time.
The Wildcats will host St. Anne-Pacelli on April 19 for the team’s final match of the regular season.