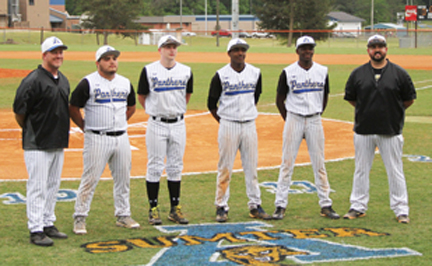 AMERICUS – Following a proper 20-5 thrashing of the Dougherty County Trojans on April 8, the Americus-Sumter High School (ASHS) Panthers baseball team returned to their home diamond on April 11 to try their luck against the Monroe Tornadoes on ASHS Senior Night.
In what would prove to be an 11-inning marathon, clocking in at just short of four hours, the Panthers built an early lead before succumbing to a sixth-frame rally from the visitors that tied the score and sent the match into four extra innings.
In the top of the 11th stanza, the Monroe crew eventually managed to find a chink in the Panthers’ defensive armor, pushing across a pair of runs to secure the 6-4 victory.
Despite the final outcome, no one in the crowd that evening could say that the Panthers didn’t make an impressive stand in the final innings of the game, forcing their Monroe counterparts to earn every base on their way to the win.
Prior to the beginning of the action, the Panthers honored the team’s four senior members, Dewyn Coley, Jacob Hicks, Tywin Jackson, and Donald McCook. 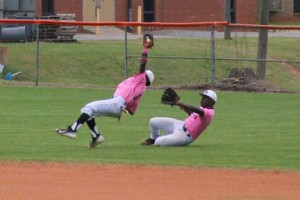 When the game began, the Panthers’ defenders efficiently retired Monroe’s prospective runners before heading to the dugout.
Devyn Coley drew a walk to open the bottom of the initial frame before stealing second base with Jamorrian Johnson at the plate. Johnson made his way to second base on an errant pitch, but the Panthers soon ceded the third out, stranding two runners on base.
Monroe opened the game’s scoring in the top of the second with an RBI drive down the third base line. The Panthers concisely shut down the prospective rally with a double play and responded in kind in the bottom of the frame.
Jackson kicked off the action with a trip to first on a passed ball before Kierston Harvey and McCook drew walks to load the bases.
Coley then took one for the team, being plunked by a pitch to push Jackson home and tie the score. Timothy Etheridge belted a grounder that hugged the first base line, resulting in a single that pushed Eric Rutherford (courtesy running for Harvey) across the plate to put the Panthers up 2-1.
After dispatching three batters in succession in the top of the third, the Panthers struck again in the bottom of the stanza, following a single on a passed ball by Braelon Williams. A sacrifice fly by Hicks gave Williams ample time to head to second before his round trip was completed on a hard single to the centerfield fence off Jackson’s bat.
With the Panthers ahead 3-1, the team soon returned to the field to defend their advantage.
The Tornadoes had other ideas, however, as a Monroe batter slugged a homerun over the left field fence to bring the visitors within one run of the Panthers’ lead.
The Panthers made up for lost ground in the bottom of the fourth frame as Johnson connected on a single, stole second, and proceeded to third base on a wild pitch. Hicks then added a single of his own to bring in Johnson and re-establish the Panthers’ two-point lead.
The next inning went scoreless, but the top of the sixth proved to be very productive for the Monroe squad. With four hits in the inning, the Tornadoes managed to add a pair of runs, tying the score 4-4, where it remained through the end of regulation play.
Neither team would see the opportunity to gain any ground over the next four frames.
In the 11th inning, however, the Tornadoes connected on a series of hits that produced two more runs and cinched the hard-earned win for the visitors.
Harvey pitched six innings for the Panthers, striking out three batters. Kendall Butler trotted to the mound in relief in the seventh stanza, pitching the final five innings and striking out eight batters.
Etheridge led the Panthers from the late, connecting on a trio of hits and bringing in one RBI. Johnson followed close behind, collecting two hits and stealing three bases.
Jackson and Hicks each contributed an RBI on their sole hits of the match and Jackson stole one base.
Butler connected on one hit and Harvey stole two bases.
The Panthers traveled to Bainbridge on April 13 to take on the Bearcats in a region 1-AAAA match-up. The results of this contest were not available at press time.
The ASHS boys will return to action on April 19, traveling to Thomasville to take on Thomas County Central.