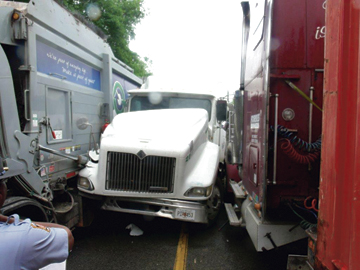 A semi is shown crushed against the side of a garbage truck, the result of a three-vehicle accident Tuesday morning in rural Sumter County.

AMERICUS — A bizarre late morning traffic accident resulted in damages but only one minor injury. Two semis and a garbage truck tangled up around 11:45 a.m.Tuesday on Ga. Highway 49 South in Sumter County.
According to the accident report from the Georgia State Patrol Post 10, Americus, which investigated, a semi owned by TM & Sons Trucking in Americus, and driven by Michael R. Tyson, 28, of Americus, was traveling north on Highway 49 while another semi, owned by Forbes Trucking of Montezuma and driven by Claude K. Forbes, 25, of Montezuma, was traveling south on 49.
The report says a third vehicle, a garbage truck, owned by Waste Industries LLC of Warner Robins and driven by Eddie B. Wafford, 47, of Americus, was stopped in the roadway and collecting trash. 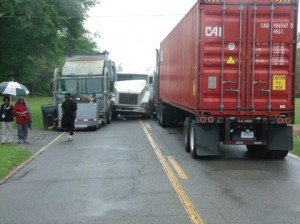 The Americus Times-Recorder traveled to Dubai and Abu Dhabi with Mike Cochran of Americus recently on a work trip. read more