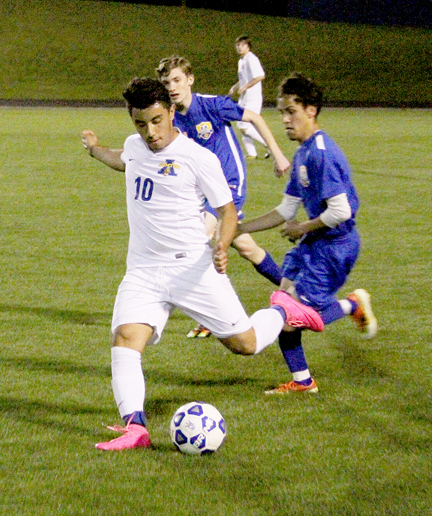 Michael Murray/Americus Times-Recorder: Jonathan Abarca prepares to make a shot on the goal during an early April contest in Americus. Abarca scored eight goals in the Panthers’ April 12 win over Cook County.

The Americus-Sumter High School (ASHS) soccer team is preparing to bring the team’s regular 2016 season to a close, with an eye towards the state playoffs which are scheduled to begin on April 28.
Though the Panthers have won only one of their last four matches, the team currently enjoys an impressive 9-6 overall record. The Panthers are 6-3 in region 1-AAAA competition.
Now, the Panthers are gearing up to travel to Bainbridge on April 21 and take on the Bearcats for their final scheduled contest of the regular season. The winner of this match-up will earn a spot in round one of the state playoffs.
The ASHS boys hosted Warner Robbins on April 8 in a non-region tilt, eventually taking a 6-3 defeat after a heated match.
Warner Robbins scored a pair of quick goals in the first half. ASHS head soccer coach, Greg Fowler, stated in a recent press release, “We adjusted to match their speed and intensity and scored a goal to bring the game to 2-1.” ASHS’ Jonathan Abarca put the ball in the net for the Panthers with an assist by Frahan Abdullah.
Warner Robbins soon scored another, but the Panthers responded in kind with a Rosendo Gonzalez goal, assisted by Frankie Gonzalez, before the half-time break.
Abarca, assisted by F. Gonzalez, tied the game for the Panthers 3-3 in the first half but, according to Fowler, “Unfortunate mistakes allowed Warner Robins to score two more to bring the game to 5-3. They scored a ‘garbage goal’ with 20 seconds left in the game.”
The game ended with the visitors ahead 6-3.
Sore from the defeat and unwilling to let it keep the team down, the Panthers brushed themselves off and traveled to Cook County on April 12.
The Panthers went on a rampage in the match, besting their hosts 10-0 in a game that was called early in a “mercy ruling”.
Abarca lit up the pitch in the first half, scoring four goals for the Panthers. Abarca opened the spree on a 35-yard direct free kick. He booted in the following three from beyond the 18-yard box, with R. Gonzalez assisting in the final point of the half.
A penalty kick from Arize Anagbogu put the Panthers up by five early in the second half before Abarca scored again on a through-ball from Montavious Nedd. 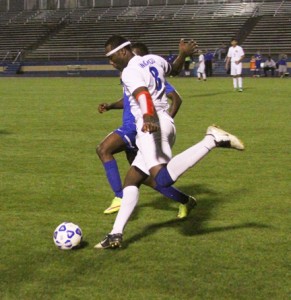 Michael Murray/Americus Times-Recorder:
Arize Anagbogu rears back to boot the ball down field during an early April contest in Americus. Anagbogu contributed a goal to the Panthers’ April 12 victory over Cook County.

Abarca went on to assist R. Gonzalez in a goal before propelling in another on a header, assisted by Jason Trujillo on a cross to the middle.
Abarca booted in the final two goals, assisted by Carlos Virgen and Francisco Rodriguez to complete the shut-out.
The Panthers traveled to Thomas County Central (TCC) on April 14 for a contest that remained scoreless well into the second half. In the 66th minute, TCC scored on a direct kick that was deflected off the toe of a player and went in the back of the net. The Yellowjackets scored another goal a few minutes later, sentencing the Panthers to a 2-0 loss.
On April 15, the Panthers headed to Cairo to try their luck against the Syrupmakers. Following an action-packed match-up, the Panthers succumbed to a 5-0 defeat in the contest. Cairo put in a pair of goals in the first half of the competition.
“We played fairly well the first half and held off many attacks,” Fowler stated. “The rain started pretty hard in the second half and things kind of went from bad to worse.”

Dust off your bike and get ready for the Prison to Peanuts Bicycle Adventure, scheduled for Saturday, April 23, 2016.... read more