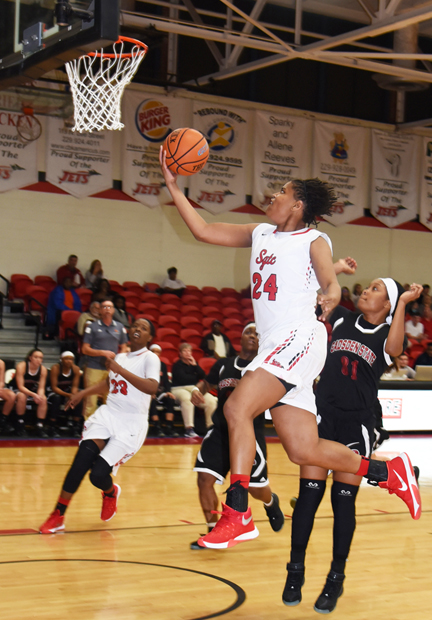 Submitted by SGTC: Shown here in a 2016 contest in Americus, SGTC’s Angela Tompkins was named to the NJCAA Division 1 first team All American squad for the 2015-16 season.

AMERICUS – South Georgia Technical College (SGTC) Lady Jets sophomore forward, Angela Tompkins, from Punta Gorda, Florida was recently selected as a 2015-2016 National Junior College Athletic Association (NJCAA) Division I Women’s basketball first team All-American.
“I am so proud of Angie,” said SGTC Lady Jets head coach, James Frey. “She is very deserving of this honor. It is an honor to be recognized by the NJCAA as one of the best women’s basketball players in the country. She has worked hard and has been a great ambassador for our program and our college.” Tompkins is currently being recruited by a number of NCAA Division I universities to finish out her junior and senior seasons.
While this is the first time that Frey has had a player selected to be an NJCAA first-team All-American, Tompkins is his third player in four years at SGTC to earn NJCAA All-American honors.
Last season sophomore, TaQuandra Mike, was selected as an NJCAA Division I All-American Honorable Mention. In 2013-14, sophomore Shamekia “Polly” Murry, was selected as a second-team All-American. Murry and Mike helped lead the Lady Jets to their second NJCAA National Tournament in two years and the college’s best single season record of 30 wins and only five losses.
“This is a tremendous accomplishment,” said Frey. “Angie did an exceptional job for us this season and she was nominated and named as an NJCAA first team All-American despite the fact that we were two points shy of advancing to the national tournament this season.”
Tompkins was selected for the honor after she and Frey helped lead the Lady Jets to the GCAA Division I regular season championship and a second place finish in the NJCAA Region 17 tournament. The Lady Jets finished the season with a 27–6 overall record and a 14–2 performance in the GCAA.
Tompkins played in 32 of the Lady Jets’ 33 games during the 2015-16 season and started in each of those match-ups. She averaged 17.6 points and 11.1 rebounds per game for the Lady Jets. She hit 60 percent of her shots and was a 74.8 percent free throw shooter. She averaged 7.1 defensive rebounds and 4.0 offensive rebounds each game. She also contributed 1.7 assists, 1.6 steals, and 1.3 blocks in each outing.
The Lady Jets averaged 73 points per game during the 2015-16 season while holding their opponents to an average of only 53.1 points. They also out-rebounded their opponents 47.2 to 28.8.
SGTC has now had 11 players (seven Lady Jets and four Jets) who have earned the distinction of being All-Americans.
The four Jets players to earn the NJCAA All-American honors include: Anthony “Duke” Ethridge, Jae Crowder, “J.Q” Jonqueveilin Turpin, and Wayne Williams.
Frey was recognized earlier this season for capturing his 100th win as a head coach at SGTC. He was also selected as the GCAA Coach of the Year for the second time in four years in 2015-16.