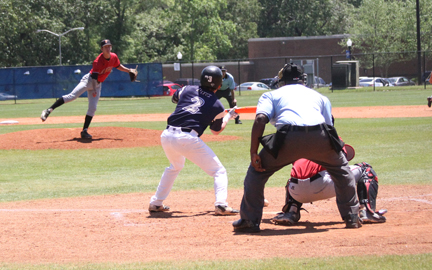 Michael Murray/Americus Times-Recorder: GSW’s Will Redding lays down a sacrifice bunt during the Hurricanes’ April 17 contest in Americus. Redding scored the first run for the ‘Canes in their April 20 blowout of ASU.

AMERICUS – Senior outfielder, Devyn Newberry, went three-for-four in his final game at Hurricane Stadium and led the Georgia Southwestern baseball team past Albany State University, 11-1, in the ‘Canes home finale on the evening of April 20.
GSW ran its non-conference record to 17-2 this spring and overall mark to 22-21, while Albany State fell to 16-31.
After being retired in order in the first two innings, GSW pushed across its first run in the third when Will Redding scored from third before Newberry was tagged out in a delayed steal rundown.
Albany State loaded the bases to open the fourth inning and eventually tied the game when a runner scored as the Hurricanes turned a double play.
The contest didn’t stay tied for long.
Evan Alderman led off the home half of the fourth inning with a single and scored on the next play when Alex Kranick doubled down the right field line. Kranick scored two batters later on a Zach Barron double to left field.
GSW put the game out of reach in the fifth with five hits and five runs as the frame was highlighted by Brett Burgess’ two-run double. 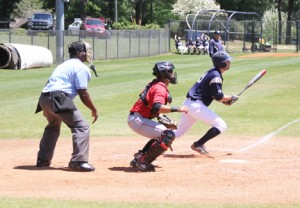 Michael Murray/Americus Times-Recorder:
GSW’s Brett Burgess belts a triple during an April 17 contest in Americus. Burgess hit a two-run double to cinch the win for the ‘Canes in the team’s home closer on April 20.

The Hurricanes took their 8-1 lead to the seventh inning and ended things early after the final three crossed the plate. It was only fitting that a senior delivered the game-ending hit. Newberry singled up the middle to plate Jared Jones.
Kranick finished with two hits, two RBIs, and two runs scored in three trips to the plate. Barron matched Kranick with two hits, a pair of RBIs, and two runs scored while adding a walk. The Hurricanes pounded out 11 hits to go with their 11 runs. Newberry extended his season-best hitting streak to 10 games.
The Hurricanes used six different hurlers in the seven-inning game. Starter, Layne Gusler, covered the first two frames with each reliever throwing one inning. Matt Hubbard (1-1) picked up the win by throwing a scoreless fifth. Hubbard and Mitch Holloway, who was the first out of the pen, were the only two pitchers to hold ASU without a hit while on the hill. Earl Dupree, Jarrod Crum, and Daniel Perez saw an inning of action. Crum and Perez tossed scoreless frames.
GSW improved to 18-0 this season when holding opponents to less than six runs.
The Hurricanes close out their 2016 campaign with seven road games. Next up is a trip to Francis Marion University for a three-game weekend Peach Belt Conference series against the Patriots. The schools will play a doubleheader on April 23 starting at 1:00 p.m.
The ‘Canes travel to Carrolton on April 25 to test their skills against West Georgia University before heading to Young Harris on April 30 to kick off a three-game season-closing series.