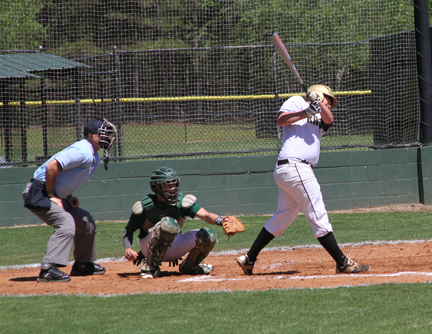 Michael Murray/Americus Times-Recorder: Southland Academy’s Michael Hudgens blasts a base hit during an early April contest in Americus. Hudgens brought in three RBIs in the Raiders’ April 12 contest against the Valiants.

The Southland Academy Raiders baseball team has seen some exciting action in the past two weeks, going on to earn significant victories over the Valwood Valiants and the Southwest Georgia Academy (SGA) Warriors. Each of these teams had previously defeated the Raiders in early-season contests.
On April 12, the Raiders traveled to Valdosta to take on the Valiants, earning a 9-4 victory to lessen the sting of the team’s loss to Valwood on March 16 in Americus. The Raiders traveled to Damascus on April 18 to avenge an early-season loss to the SGA Warriors with a 10-0 shutout.
Sandwiched in between these equalizing wins, the Raiders took on the Deerfield-Windsor Knights on April 15, suffering a 9-1 defeat in the match.
At the conclusion of this series of contests, the Raiders are left with a 5-10 overall record on the 2016 season.
On the Raiders’ match-up against Valwood, Southland head coach, John Brady, told the Times-Recorder, “That was a good win for us. A really good win. They beat us 15-1 here in Americus. These young guys have been getting better every week. Now, we’re playing pretty good baseball, for the most part. We went down there and pulled in the upset. It was a good one.”
Raider pitcher, Reed Dillard, is credited with the win after tossing a complete game.  Dillard surrendered four hits and no earned runs while striking out three batters. 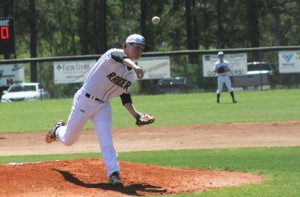 Michael Murray/Americus Times-Recorder:
Southland Academy pitcher, Reed Dillard, turns up the heat during an early April contest in Americus. Dillard pitched a complete game in the Raiders’ upset of Valwood on April 12.

Offensively, the Raiders scored one run in the first stanza, five runs in the second, one in the fifth, and two in the seventh.
“Those two runs in the seventh were huge because they had scored four in the fifth to bring themselves within range of a comeback, at 7-4,” Brady said. “We got a little cushion with the two runs in the seventh.”
Dillard nailed a triple on his sole hit of the match, bringing in three RBIs and crossing the plate once.
Harrison Bell connected on three of four at-bats, bringing in two RBIs.
Parker Weldon went two for four with a double and two runs scored.
George Wall went one for two with an RBI and a run scored.
Michael Hudgens went two for four with three RBIs.
Altogether, the Raiders connected on 12 hits in the match.
Brady concluded, “We had a lot of guys contributing throughout the line-up. We had a good day.”
Weldon sparked the Raiders’ second-inning rally, leading off with a single before Wall drew a walk. Hudgens then reached on a fielder’s choice, loading the bases. From there, Hunter McCain drove in Weldon and Dillard belted a triple to clear the bases. Bell followed with a base hit to drive in Dillard, leaving the Raiders with a comfortable 6-0 lead before they left the dugout.
The Raiders added another run to their cushion in the fifth before putting the game away in the seventh.
Weldon, once again, sparked the seventh-inning rally by leading off with a double. Wall then joined Weldon on base with a single. Wall proceeded to steal second and Hudgens completed the rally, driving in both runners on his next at-bat to cinch the victory. 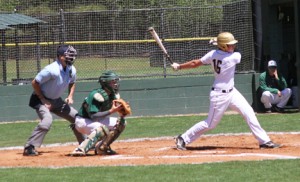 Michael Murray/Americus Times-Recorder:
Harrison Bell collects a hit for the Raiders during an early April contest in Americus. Bell batted three for four and brought in two RBIs in the Raiders’ upset of the Valwood Valiants.

On the Raiders’ April 15 battle against Deerfield, Brady stated, “We played a lot better than we did down at their place,” referring to the Raiders’ early-season loss to the Knights. “We made a couple of mistakes in the second and seventh innings to extend their lead. If we’d played really clean, perfect baseball, we could have held the loss to only two or three points… They scored three runs in the seventh, all unearned.”
“We played well,” Brady concluded. “But if you make mistakes against a team like Deerfield… There’s no room for error with them. If you allow the bottom of their order to get on, which we did in the second inning, their lead-off batter will come up and hit a homerun.”
Hoyt Gurley pitched the first half of the match. “He did a good job,” Brady said. Bell took the mound in relief, wrapping up the final three and two-thirds innings. “He was great as well,” Brady continued. “He didn’t allow any earned runs.” Bell collected three strike-outs and gave up one walk during his time on the hill.
In the second frame of the contest, Weldon contributed a triple before Gurley batted him in for the Raiders’ only run of the game.
The Raiders then returned to the diamond in Damascus on April 18 to avenge their non-region opener loss at the hands of the SGA Warriors.
They were certainly successful in their mission, working for a five-inning 10-0 shutout of their hosts.
Hudgens pitched all five innings, giving up three hits while striking out two batters. “Michael did a great job. He kept them off balance. They didn’t hit but one ball hard the whole game,” Brady said.
“We didn’t make any errors in that game,” Brady said. “That’s always a plus… They have a good baseball team and it’s always nice to beat a talented team.”
The Raiders came out strong, scoring three runs in the initial frame. Hunter McCain took one for the team, being plunked to open the inning. Hubbard then offered up a sacrifice fly to push McCain to second base. Dillard followed with a double, plating McCain before Bell reached on an error. Gurley then contributed a base hit, driving in another runner and Wall followed with an RBI to add one more to the tally.
“From there, we clicked along for a long time and didn’t score,” Brady said. “Their pitcher settled in and really did a good job.”
Southland’s boys tried to squeeze in another run in the fourth, but were cut down at the plate.
The Raiders exploded in the top of the fifth, however, scoring seven consecutive runs to close out the game.
Hubbard reached on an error before the next batter drew a walk. Bell followed with a single to load the bases. Weldon, Gurley, Wall, and Hudgens followed with a series of consecutive RBIs before McCain brought in a pair on runs to close out the game on a run rule.
The Raiders connected on 11 hits total in the match and only struck out twice, which Brady stated may be a season low for the team.
“We’re playing better. We have three more games. We still have an outside shot at a playoff spot, so we have business to take care of. Ultimately, we’ll keep doing what we’ve been doing and just try to get better every day.
The Raiders hosted the Tiftarea Panthers on April 22. The results of this contest were not available at press time. Southland’s boys will return to action on April 26, hosting the Westwood Wildcats.

From  STAFF REPORTS ANDERSONVILLE – Running and history enthusiasts alike made their way to Andersonville on April 16 for the... read more