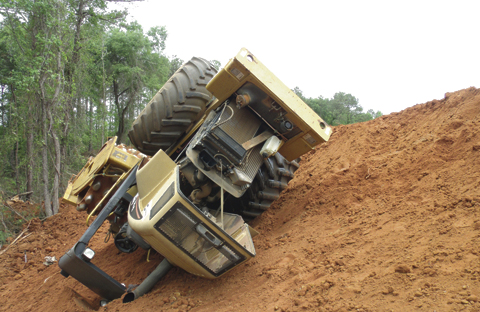 This is the compactor that rolled over Thursday morning at a work site in rural Sumter County. The machine’s operator, Vernon Lockhart, died of injuries he sustained in the accident.

AMERICUS — A member of a work team building a dam Thursday in rural Sumter County died from injuries sustained in a heavy equipment accident. The victim was identified as Vernon Jerome Lockhart, 50, of Americus.
Trooper Cody Carter of Georgia State Patrol Post 10, Americus, which investigated the accident, said the call came at 11:20 a.m. Thursday to a field near the intersection of Middle River and Lane Store roads in rural eastern Sumter County.
Carter said Lockhart was operating a compactor when he backed the machinery off the edge of the road he had established, resulting in the compactor rolling over onto its side.
The trooper said the victim had a serious head injury, possibly caused by striking his head on the metal beam of the compactor as it rolled over. Carter said Lockart was taken by ambulance to Phoebe Sumter Medical Center where he was pronounced dead.
Chief John Ekaitis of Sumter County Fire & Rescue (SCFR) told the Times-Recorder that he and Gold Star EMS were the first to reach the scene. Upon arrival, the chief said other workers had already pulled Lockhart from the heavy equipment. Upon reviewing the extent of his injuries, Gold Star called in a life flight. It was later determined by EMS personnel to take Lockhart to the hospital in Americus via ambulance.

The students at Sumter County Intermediate School enjoyed a Winter Dance in February. Both grades dressed up for some fun... read more