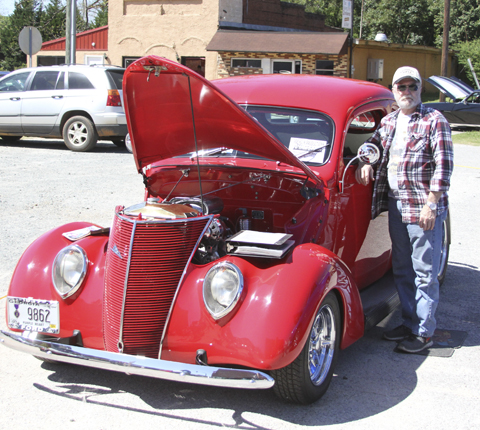 Roy Riggleman, of Columbus, shows off his 1937 Ford coupe at the Plains Car Show on April 11 in Plains.

PLAINS — On April 9, hundreds of classic automobile enthusiasts descended on the small town of Plains for the city’s ninth annual April Plains Car Show.
Visitors to the show teemed in the streets, marveling at the high-performance machines brought in by gear heads from all over the Southeast.
The atmosphere of the event was festive, with the aromas of Southern delicacies emanating from the various food vendors. The smells wafted through the main drag which was lined with the brightly-colored automobiles, highlighted by the persistent glint of the afternoon sun off the freshly-polished chrome.
Plains resident, Bobby Salter, owner of Plains Peanuts, which sponsored the event, spoke with the Times-Recorder during the event. “It looks like we have close to the largest show we’ve ever had today,” he stated. “We’re going to see close to 100 cars.”
Asked if he is an automobile collector himself, Salter said, “Well, I like to look at them… We have some great cars out there today. We have some super nice stuff.”
Several of the automobile owners spoke with the Times-Recorder at the event as well, each eager to talk about their beautifully restored machines.
Americus resident, Alex Arizmendi, owner of a local mechanic shop named Arizmendi Racing, brought a 1972 Corvette Stingray to display at the event.
“This has been a dream car of mine since I was a child,” Arizmendi said. “I remember pushing a toy version of this car around on my knee.” Arizmendi went on to say that he bought the automobile from a friend with the intention of restoring it alongside his children. He said that he recently acquired the car and that this is the first show he’s attended with the automobile.
“It’s just a way to spend time with the kids,” he said. “That’s mostly what it’s for is for the kids and I to play with.” 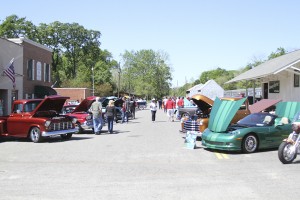 Americus resident, Alex Arizmendi, poses with his kids next to the 1972 Corvette Stingray that they brought to the Plains Car Show on April 11.

Roy Riggleman, of Columbus, was another participant in the competition. Riggleman brought a 1937 Ford five-window coupe capable of pulling 435 horsepower to the show.
“I get about 15 miles to the gallon on it,” Riggleman joked after describing the engine’s specifications.
Riggleman said that, despite having purchased the automobile in working order, he had designed and installed a custom interior, complete with leather seats, a GPS, and an mp3 player to merge both modern and classic sensibilities into the machine.
Asked if he has a history of restoring vintage automobiles, Riggleman responded, “I’ve been messing around with cars since I was 16 years old, but this is the first time that I’ve had a nice hot rod like this one.”
Another stand-out automobile from the show was brought by David Aten, of Wildwood, Florida.
Aten presented a convertible cherry red 1968 Chevrolet Impala, capable of reaching around 450 horsepower.
In a brief interview, Aten told the Times-Recorder that he has been collecting and restoring classic cars, “for quite a while.”
Aten went on to say that he has attended the annual Plains Car Show for several years. In fact, he said that the car he was currently showing had been chosen as President Jimmy Carter’s favorite several years ago.
Aten has taken the car to shows at locations up and down the East Coast. “This is the eighth time I’ve brought the car here, I think,” he said. “I like it here.”
Jerry and Judy McMannus had traveled from Statesboro to attend the event. With them, they brought a 1949 Chevrolet pickup truck.
After describing some of the restorations that the truck has undergone, Jerry said, “It’s what we refer to as a street ride.” 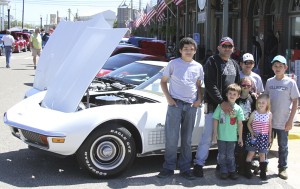 The main street of Plains was filled with people and cars. 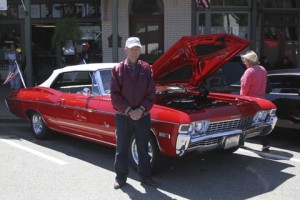 David Aten, of Wildwood, Fla., brought his convertible 1968 Chevrolet Impala to display at the Plains Car Show on April 11.

Jerry went on to say that he and his wife have traveled with their classic rides to events in five different states, as far away as Maryland. Jerry said they’ve had that particular truck for over 20 years and that they have a similar truck, originally built in 1966 back home.
“We enjoy them,” Jerry said. “It’s a hobby. We travel together with all of our friends and go to different car shows. .. It’s the camaraderie that we like.”
Awards were presented for the judges’ favorites as determined by influential members of the Plains community, such as the mayor, the police force, and the show’s sponsors. The winner of the most prestigious award at the event was determined by President Carter, himself.
The city regularly holds another car show in November. This year’s event will mark the fifth year that it’s been held. 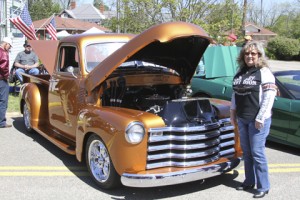 Judy McGannus, of Statesboro, displayed her 1949 Chevy pickup at the Plains Car Show on April 11.

GSW to host athletic banquet on April 27 in Americus