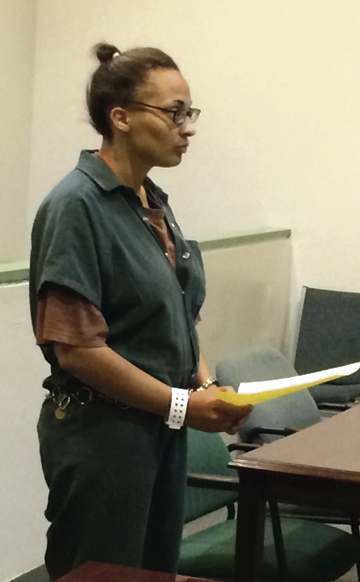 AMERICUS — A woman charged with aggravated assault in a weekend incident was denied bond Monday afternoon, but her charges were upgraded to murder when her alleged victim died a short time later.
The Georgia Bureau of Investigation Region III Office in Americus is leading the investigation into a stabbing incident that occurred between 9 and 9:30 a.m. Saturday, according to GBI Assistant Special Agent in Charge Terry Howard.
Howard said the investigation is in its early stages but they believe an altercation occurred between the two parties inside a vehicle, and led to the stabbing. Kierra Warren, 24, of Americus, was charged with aggravated assault by the Americus Police Department on Saturday after she allegedly stabbed Brandon Douglas, 23, of Americus.
Howard said Douglas was taken to Phoebe Sumter Medical Center and then airlifted to the Macon Medical Center where he died at 4:25 p.m. Monday.
Meanwhile, Warren appeared before Sumter County Magistrate Judge Judy Tanner shortly after 4 p.m. Monday on the charge of aggravated assault. Tanner denied bond, giving her reason as the case is still under investigation. It was a short time after Warren was returned to jail that Douglas died. Warren’s charge was upgraded to felony murder on Tuesday morning, according to the GBI.
Warren was scheduled to appear before Tanner again Tuesday afternoon, on the new charge. Because of the felony murder charge, Warren will now have to appear before a Superor Court judge for a bond hearing.

By BETH ALSTON beth.alston@americustimesrecorder.com www.americustimerecorder.com AMERICUS — The race for the office of Sumter County Sheriff has two candidates, both... read more