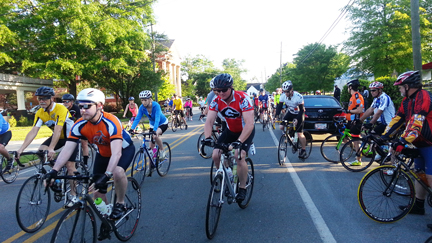 Photo by Ryan Iafigliola, Sumter Cycling: Over 100 cycling enthusiasts took off on their journey from Rees Park in Americus on the morning of April 23. The event concluded at Rees Park and riders were invited to take part in the festivities of Arts in the Park following the ride.

AMERICUS – Sumter Cycling, in conjunction with the National Park Service and the River Valley Regional Commission, sponsored the annual Prison to Peanuts bicycle adventure on April 23 in Sumter County. Over 100 riders participated in the event, with 15 opting to go in for the long haul, a 105-mile ride that spanned five towns in two counties.
Beginning at Rees Park in Americus, the route was designed to showcase many of Sumter County’s historic landmarks as well as give participants the opportunity to take in some of the gorgeous scenery in around the area.
Riders traveled to Plains, Ellaville, Andersonville, Desoto, and Leslie before returning to Americus, where the city’s annual Arts in Rees Park event was in full swing.
On some of the many stops along the route, Riders were afforded the opportunity to visit portions of the Jimmy Carter National Historic Site as well as the Andersonville National Historic Site.
Ryan Iafigliola, president of Sumter Cycling, spoke with the Times-Recorder after completing the ride to discuss the event. “The weather was perfect,” Iafigliola said. “The turn-out was great for the ride and the finish at Arts in the Park can’t be beaten, so it was awesome… It was nice for the riders to have four different route options. They could choose what works best for them according their time and abilities. There was something for everyone. This year, we had 130 riders, which is the most that we’ve ever had, so that is nice to see as well…”
Asked where the participants had traveled from to enjoy the ride, Iafigliola said, “Around 80 percent of the people that came to ride are from out of town. We had one man from the United Kingdom participate… He was in the area and heard about it and came over. We also had people from Atlanta, Alabama, and Florida, so it’s been a pretty good regional event, I’d say.” 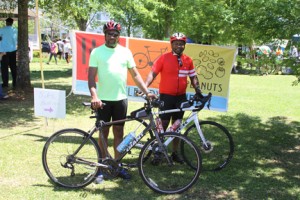 Michael Murray/Americus Times-Recorder:
Victor Hall, left, and his brother, Torey Hall, pose with their bicycles at Rees Park during the Arts in the Park event after completing the Prison to Peanuts Bicycle Adventure.

Several other riders stopped to talk with the Times-Recorder after completing the event as well.
Torey Hall and his brother, Victor Hall stopped for a brief interview after completing their journey.
An Americus native, T. Hall came Thomasville to participate in the event. He stated that this was the second time that he has come to Sumter County for the Prison to Peanuts Ride and that he looks forward to returning next year.
Asked what he enjoyed about the day’s ride, T. Hall stated, “The scenery. It was very nice. The weather was nice. The wind is not too bad. It was just an enjoyable ride… It was great… I had a good crew of people with me… all of the conversations were great and the people were very nice… I probably could have ridden a little further.”
V. Hall, an Americus local, said, “It was enjoyable. It was kind of competitive, in a sense. It was great exercise and fellowship.”
David Lindsey, from Cordele, stated, “The ride has a few good hills, so I was encouraged to come down here.” Asked about his favorite part of the ride, Lindsey stated, “It was all good. It has just the right amount of hills to train you and enough length that you know you’re getting a great workout.” Lindsey, who said that he has been an avid cyclist for a very long time told the Times-Recorder that he regularly participated in Sumter Cycling events.
Harry McGowan and Gill Pittman have been participating in century-length portion of the ride each year since 2008. Asked what keeps them coming back, McGowan told the Times-Recorder, “Having been from Americus and lived here for a long time, my riding partners all live down here. It’s a good opportunity to visit family as well.”
McGowan and Pittman stated that they completed the 105- mile ride in five hours and 31 minutes.