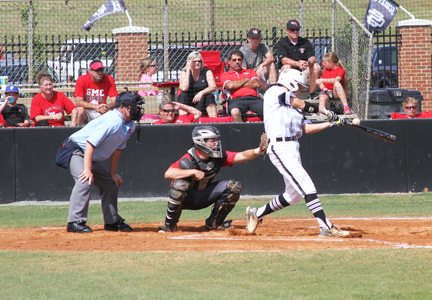 Michael Murray/Americus Times-Recorder: Schley's Reid Ragsdale belts a single during game one of the Wildcats' April 29 double-header against MCG in Americus. The Wildcats won the match 7-0.

Wildcats devastate MCG in first round of state playoffs, set sights on Taylor County for round two

ELLAVILLE – The Schley County Wildcats baseball team gave an exciting performance on the diamond on April 29 in the first round of the state Class A playoffs. The ‘Cats took a pair of significant wins over the Georgia Military College (GMC) Bulldogs in a double-header to push the team one step closer to the  state title, which they hope to be defending in mid-May.

The ‘Cats currently enjoy a 24-2 record on the 2016 season.
Schley’s boys earned a 7-0 victory in the series opener before putting the first round away with a devastating 13-1 win in the nightcap.
The Wildcats earned enough runs (two) to cinch the victories in the first inning of each match and combined strong pitching performances with their hard-nosed offense to gain runaway wins in both of the contests.
Clint Sellars set the pace for the ‘Cats in game one of the series, connecting on a pair of hits, including a solo homerun. Sellars brought in two RBIs for the ‘Cats.
Blake Howell was dominant on the mound for the Schley squad, pitching a complete game and striking out 12 batters.
Brett Usry stole the show for the ‘Cats in game two of the series, contributing four hits and four RBIs to the team’s second victory of the afternoon. On the defensive side of the ball, Usry did work on the hill for the initial five innings for the ‘Cats, striking out 10 Bulldog batters. Chase Patrick closed out the game for Schley, striking out five.
The Wildcats are back in action on May 4 for round two of the playoffs, taking on the Taylor County Vikings in Ellaville. The ‘Cats have previously defeated the Vikings twice this season in region competition.
Be sure to visit the Americus Times-Recorder again soon for all of the action-packed details of the Schley v. GMC series.