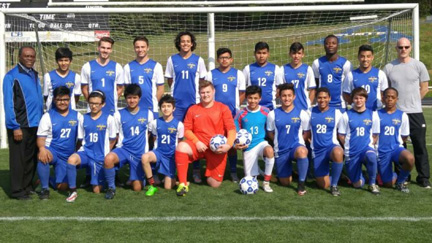 Submitted by Carlotta Fowler: The Americus-Sumter High School Panthers pose for a team shot prior to the beginning of the 2016 season. The Panthers wraped up their season on April 26 with a loss to the Spalding County Jaguars and a 10-7 overall record. The team’s region 1-AAAA record was 7-3 at the conclusion of the regular season.

The Americus-Sumter High School Panthers soccer team saw a tough defeat in their first-round state playoff game on April 26 at the hands of the Spalding High School Jaguars in Griffin.
With the loss, the Panthers capped off their season with a record of 10-7. Coming into the contest, the Panthers enjoyed an impressive record of 7-3 in region 1-AAAA competition.
In the team’s playoff match, the Jaguars got the scoring started early, with a player using a header to put the ball in the back of the net off of a corner kick.
According to Panther head soccer coach, Greg Fowler, “The second half was played poorly and tired. After Spalding’s second goal, things kind of went from bad to worse. Spalding scored four goals in the second half. The Panthers played tired and were unable to string passes together to move the ball up the field.”
Fowler went on to say that the team will lose only three players to graduation this year. “Next year’s team should be fairly strong considering the players will have played together for quite some time and they will all have had good experience playing high school soccer,” he stated.
Fowler also told the Times-Recorder that he will not be returning to coach the Panthers in the 2016-17 season, as he has recently accepted a coaching position in Douglas County.
The Panthers had 13 total players contribute goals and assists through the season, led by Jonathan Abarca, who put 32 goals in the net for the team and assisted on 12. Frankie Gonzalez added another 15 goals and 10 assists for the Panthers while Rosendo Gonzalez added four goals and one assist. Arize Anagbogu booted in a pair of goals this season as did Jose and David Ovando. J. Ovando added two assists while D. Ovando contributed one. Carlos Virgen put in one goal and assisted on another.
Jonathan Rodriguez, Trenton Pepito, Frahan Abdallah, Montavious Nedd, Jason Trujillo, and Amani Hunter each assisted on goals as well.

By MICHAEL MURRAY AMERICUS – Following a tough 5-2 defeat at the hands of the Tiftarea Panthers, the Southland Academy... read more