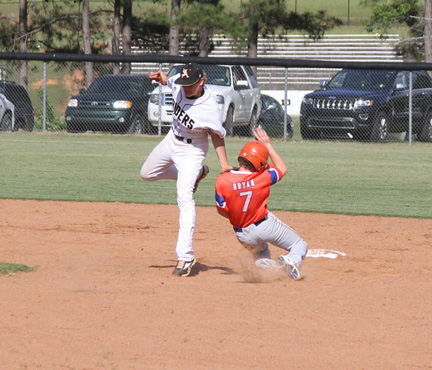 Michael Murray/Americus Times-Recorder: Southland Academy’s Hunter McCain recovers from a leaping catch in time to tag out a runner during game one of the Raiders’ season-closing double-header in Americus.

AMERICUS – Following a tough 5-2 defeat at the hands of the Tiftarea Panthers, the Southland Academy Raiders baseball team closed the curtain on the team’s 2016 season on April 25 with a pair of wins over the Westwood Wildcats in a double-header in Americus. The Raiders earned a 4-2 victory in game one of the series before going on to snag an 8-2 win in the nightcap.
With the pair of wins, the Raiders improved their overall record to 7-11 on the season.
When facing Tiftarea for their final region 3-IAAA game of the season on April 22, the Raiders gave up three runs in the initial frame before pitcher, Reed Dillard, found his stride. “After that point, he pitched great,” said Raider head coach, John Brady.
Southland’s Harrison Bell and Hoyt Gurley managed to cross the plate in the fourth frame (batted in by Tyler Harrell and Michael Hudgens) and bring the Raiders within one, but Tiftarea added another pair of runs in the sixth stanza to cinch the victory.
“We had runners all over the place in the first four innings, but just couldn’t make anything happen to get us across the plate,” Brady concluded. “We have to give credit to Tiftarea. Their offense really gave us a hard time.”
Brady went on to say that the loss had put the Raiders out of contention for a playoff appearance.
The Raiders’ first match of the afternoon against Westwood on April 25 got off to a slow start as the teams stubbornly utilized their strong defenses to prevent their opponents from gaining any ground.
With Dillard on the mound, the Raiders gave up one hit in the top of the first inning before dispatching the next three batters in succession. Southland’s boys attempted to make their move in the bottom of the first when, with two outs on the board, Dillard belted a double to the centerfield fence. Harrison Bell then took a free pass after being hit by a pitch and Parker Weldon followed by drawing a walk to load the bases. With the team in scoring position, Gurley nailed a shot deep into centerfield that was caught, ending the inning with three Southland runners on base. 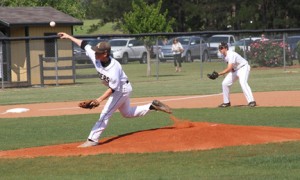 Michael Murray/Americus Times-Recorder:
Southland Academy’s Reed Dillard does work on the mound for the Raiders during the team’s season-closing double-header against the Westwood Wildcats in Americus on April 29. Dillard recorded eight strike-outs in the match.

Dillard faced four batters in the top of the second before the Raiders returned to the dugout. The Wildcats responded in kind at the bottom of the frame.
Neither team would manage to make any progress in a scoreless third inning, which was highlighted by a leaping tag on the part of Southland’s Hunter McCain as a Westwood runner attempted to steal second base.
The Wildcats broke the seal in the top of the fourth by hitting a double, followed by a grounder that pushed a runner in. Another sacrifice grounder brought in that runner, putting Westwood ahead 2-0.
The Raiders wasted no time staging their comeback as Gurley opened the top of the fourth with a free base off of a plunk. Hudgens followed with a single and Stephen Barnes immediately swatted another to give Gurley time to come in.
McCain then added a single to load the bases before Will Hubbard exploited a fielding error to take off for first and push in Jordan Grinnell (pinch-running for Hudgens).
The Raiders struck again in the bottom of the fifth, with Weldon earning a free pass by drawing a walk, followed by Gurley, who was hit by another pitch. A sacrifice bunt off the bat of George Wall gave Weldon time to complete his round trip, followed by a single from Barnes that plated Brody Shattles (pinch-running for Gurley). This rally left the Raiders up 4-2, where they would stay for the remainder of the match.

Michael Murray/Americus Times-Recorder:
Southland Academy’s Will Hubbard takes a powerful swing during game one of the Raiders’ April 25 double-header against Westwood. Hubbard contributed one RBI to the Southland cause during that contest.

Westwood threatened in the top of the sixth, batting a pair of singles and taking a base on an errant pitch to load the bases, but a deft strike-out by Dillard neutralized the threat, leaving three runners stranded when the Raiders returned to the dugout.
Three up, three down in the top of the seventh stanza cinched the victory for the Raiders.
Dillard pitched a complete game for Southland, facing 29 batters and striking out eight. Dillard gave up six hits in the contest and walked one batter.
Hudgens led the Raiders from the plate, collecting a pair of base hits in the match and contributing one RBI. Barnes batted in two runners in the match. Weldon managed to draw a pair of walks and contribute one hit to the victory. Dillard nailed the only double for the Raiders in the match and drew one walk. Hubbard brought in one RBI while McCain and Bell each connected on a single hit.
The Raiders fared even better in the evening’s nightcap, blasting off to score six runs in the first inning of a four-inning game (which was eventually cut short due to the late hour).
McCain opened the action with an exciting triple to spark the early rally, followed by a homerun off Dillard’s bat. Bell then drew a walk before Weldon stepped up to blast another homer, clearing the bases and giving the Raiders a four-run lead.
Gurley reached first base on an error and his courtesy runner, Townsend Ray, promptly stole second. Barnes followed with a base hit and Tyler Kennedy followed with another single, plating Ray. Back at the top of the batting order, McCain then belted a single to drive in Barnes.
Westwood made their comeback stand, bringing in runners in the first and third, but the Raiders quickly pushed the score out of range with another two runs in the fourth. Harrell opened the frame with a single before Gurley and Hudgens drew walks to load the bases. Shattles followed with a fielder’s choice, bringing in Harrell and Ray wrapped up the scoring with a ground out that plated Gurley.
Gurley opened the game on the mound for the Raiders, tossing three innings, striking out a trio of batters, and giving up one run before ceding the hill to Hudgens, who fanned three batters in succession to bring the game to a close in the fourth.
Following the matches, Brady spoke with the Times-Recorder, saying, “From the beginning of this season, the goal of our young team has been to get a little better every week, with each game. Our players did just that and I’m very proud of them. Before spring break, we had a record of 2-6. After spring break, we went 5-5 and two of the games that we won were against teams that had beaten us earlier in the season (Valwood and Southwest Georgia Academy). We kept working at it and we got better.”
Brady went on to express his gratitude to the team’s two seniors, Gurley and Dillard, for their contributions to the team through current and past seasons. “I’m very proud of them and we’ll really miss them. I’d like to thank them and their families for all the support that they’ve given to our program.”

From STAFF REPORTS CARROLLTON – The Georgia Southwestern baseball team struggled in a 9-0 loss against the University of West... read more