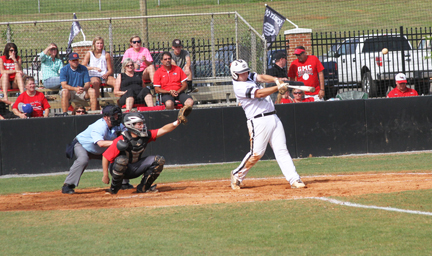 Michael Murray/Americus Times-Recorder: Schley’s Clint Sellars blasts a homerun over the left field fence to open the fifth inning of the Wildcats’ first round playoff game against Military College of Georgia in Ellaville on April 29. Sellars led the Wildcats from the plate in that victory.

ELLAVILLE – The Schley County Wildcats baseball team gave an exciting performance on the diamond on April 29 in the first round of the state Class-A playoffs. The ‘Cats took a pair of significant wins over the Georgia Military College (GMC) Bulldogs, of Milledgeville, in a double-header to push the team one step closer to the  state title, which they hope to be defending in mid-May.
Schley’s boys earned a 7-0 victory in the series opener before putting the first round away with a devastating 13-1 win in the nightcap.
The two wins leave the Wildcats with a 24-2 record on the 2016 season.
The Wildcats earned enough runs to cinch the victories in the first inning of each match and combined strong pitching performances with their hard-nosed offense to gain runaway wins in both of the contests.
The ‘Cats came out swinging in game one of the series with Michael Leeder and Brett Usry each crossing the plate in the initial frame to put Schley up by two runs.
The Wildcats continued to press forward in the bottom of the third inning when Will Barry took a free ride to first on a passed ball. A sacrifice grounder from Wade Law then gave Barry the chance to make his way to third base. Josh Hutchens followed with a free base after being plunked before Michael Leeder slipped a grounder past MCG’s second-baseman. Barry and Hutchens took advantage of their opponent’s error to make a break for home plate and add another pair of runs to the Wildcats’ lead.
Neither team would manage to score again over the next three innings, which were highlighted by a leaping snag of a line drive by Leeder followed immediately by another similar play by Chase Patrick to dispatch a pair of batters in the top of the fourth.
The ‘Cats got back into the swing of things in the bottom of the fifth stanza when Clint Sellars led off with a solo homerun. 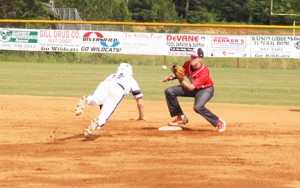 Michael Murray/Americus Times-Recorder:
Schley’s Blake Howell dives into the bag as he attempts to steal second base during the Wildcats’ April 29 state playoff opener against MCG. Howell pitched a complete game, striking out 12 batters in that match.

Schley scored their final run in the sixth after Reid Ragsdale led off with a single and promptly proceeded to steal second base. Leeder followed with a ground out that gave Ragsdale plenty of time to complete his round trip and put the ‘Cats on the winning end of a 7-0 decision.
Clint Sellars set the pace for the ‘Cats in game one of the series, connecting on a pair of hits, including his homerun. Sellars brought in two RBIs for the ‘Cats. Barry brought in an RBI on his sole hit of the game. Ragsdale connected on two hits in the match while Patrick added a double on his only connection. Blake Howell and Hutchens each added one hit. Leeder contributed three RBIs to the Schley victory.
Howell was dominant on the mound for the Schley squad, pitching a complete game, facing 22 batters, and striking out 12.
In the series closer, the Wildcats continued in similar fashion, pushing across a pair of runners in both the first and second frames. The ‘Cats scored their first two runs on a passed ball (Leeder) and a sacrifice fly from Chase Patrick. Schley added two more runs in the second frame when Leeder singled to center, scoring Ragsdale. Leeder eventually crossed the plate to build a 4-0 Lead.
The ‘Cats added another in the fifth before blowing up in the sixth and seventh to tack on another four runs each time they hit the dugout. Barry belted a two-run homer in the seventh frame to put the game away.
The Bulldogs scored their only run (unearned) of the series in the seventh inning.
Usry stole the show for the ‘Cats in game two of the series, batting four-for-four and contributing four RBIs to the team’s second victory of the afternoon.
On the defensive side of the ball, Usry did work on the hill for the initial five innings for the ‘Cats, striking out 10 Bulldog batters. Patrick closed out the game for Schley, striking out five.
Ragsdale collected two hits and scored three times in the win. Barry and Leeder each batted in two runs.
On the win, Schley head baseball coach, Chuck Cheek told the Times-Recorder, “Our pitchers were outstanding. We know they are one of our strengths and we count on them to go out and dominate games.  Blake [Howell] goes out every time and wins games for us. He attacks the zone and commands three pitches. Brett [Usry] got behind in the count a little in the first two innings, but was really sharp his last three. Chase [Patrick] pitched really well again… He had a couple of tough luck hits, but really pounded the zone with all of his pitches. Our guys combined for 23 strikeouts in two games against a good playoff team.”
“We had a much better approach in game two at the plate,” Cheek continued. “ Some of our struggles in game one were simply that Bivins was solid on the mound for GMC. Brett [Usry] had a heck of a day. Reid [Ragsdale] did some good things in game two, moving runners over and came out with a couple of hits. I’m proud of Chance Hollomon for coming through with two good at-bats later in the game.”
“We have tough match up with Taylor Wednesday,” Cheek concluded. “It’s always tough to play someone you have played twice and know everything about. They have a quality team and we should have a great series for the Elite Eight.”
The Wildcats are back in action on May 4 for round two of the playoffs, taking on the Taylor County Vikings in Ellaville.