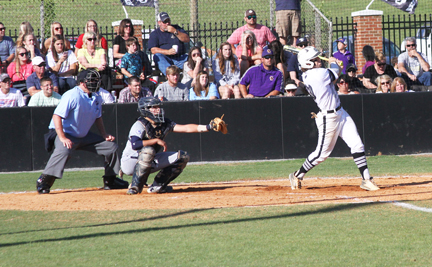 Michael Murray/Americus Times-Recorder: Schley’s Brett Usry prepares to take off as his second dinger of the afternoon sails over the left field fence during game one of the Wildcats’ playoff series against Taylor on May 4.

Wildcats sweep Vikings in round two of state playoffs

ELLAVILLE – The Schley County Wildcats have done it again, sweeping the Elite-Eight round of the state playoffs with a pair of huge wins over the Taylor County Vikings on May 4 at their home diamond in Ellaville.
The ‘Cats opened the series with a 4-0 shutout of the Vikings, propelled by a pair of homeruns off Brett Usry’s bat. Schley continued the onslaught in game two of the series, logging enough runs to cinch the win in the first frame before blasting off in the fourth to end the game early with 10 runs for an enormous 17-1 blowout. Game two marked the third time this season that Schley has nabbed a 16-point victory, the others having been earned in matches against Dooly County and St. Anne-Pacelli.
At the conclusion of the series, Schley’s boys found themselves with a 26-2 overall record on the 2016 season.
With the second round behind them, the ‘Cats look to battle the Treutlen Vikings on May 9 in the Final-Four round of the playoffs. Treutlen will enter the series with a 26-5 record and will certainly bring a challenge to Ellaville as the two teams gun for a spot in the championship game, scheduled to be held on May 14. 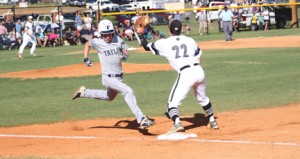 Michael Murray/Americus Times-Recorder:
Schley’s Michel Leeder snags the ball just in the nick of time to dispatch a Taylor County runner in the fifth inning of the Wildcats’ playoff opener against the Vikings on May 4.

The Wildcats got off to a strong start in game one of the series against Taylor County, breaking the seal early with a pair of runs in the initial frame.
Josh Hutchens drew a walk to open the game and immediately stole second. After Michael Leeder offered up a sacrifice grounder to push Hutchens to third base, Usry sealed the deal with a double to center field, bringing him in. Clint Sellars followed with a single that allowed Usry to make his way to third and Blake Howell capped off the inning with another single, plating Usry.
Usry continued playing the role of the thorn in the Vikings’ side, belting homeruns in the bottoms of the third and fifth frames to the roar of the home crowd. The ‘Cats tightened up their defenses from there and coasted to the comfortable 4-0 victory.
Howell is credited with the win, having pitched the complete game. Howell faced 25 batters, struck out nine, and gave up only four hits.
Usry set the bar high for the Wildcats at the plate, connecting on three hits, including two homers and a double. Usry brought in three RBIs as well.
Will Barry contributed a double. Hutchens, Sellars, Howell, and Chase Patrick each collected hits in the contest.
On the team’s first win of the afternoon, Wildcat head coach, Chuck Cheek, told the Times-Recorder, “I can’t say enough about Blake on the mound. He broke the single season strikeout record for us tonight and no one knew it… and we’ve had some solid guys on the mound. He goes out and just pitches… Blake’s a tremendous competitor on the mound. He commands the zone, changes speeds, changes eye levels, and just gets guys out. I can’t say enough about him.”
“Brett has really been on a tear, 3-4 with two homeruns, a double, and a walk,” Cheek continued. “He’s looking more and more like the state player of the year from 2015.”
The Wildcats stepped up their game in the second match of the afternoon, as Hutchens opened the batting with a single. Leeder and Usry followed with a pair of walks to load the bases before Hutchens scored on a wild pitch. Sellars then knocked a sacrifice fly to bring in Leeder and put the Wildcats up 2-0 in the first.
Taylor brought in their sole run of the series in the bottom of the frame when Drew Smith was driven in by Jake Pounds. 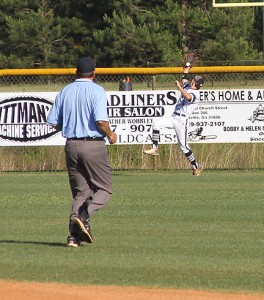 Michael Murray/Americus Times-Recorder:
Schley’s Reid Ragsdale leaps up to snag a ball that was coming dangerously close to the left field fence in the top of the sixth frame of the Wildcats’ playoff opener against the Taylor County Vikings on May 4 in Ellaville.

The ‘Cats scored two more runs in the top of the second, led by Barry who belted a homer to kick off the action. Reid Ragsdale took a plunk for a free base and proceeded to steal second before Hutchens drew a walk. Both runners advanced on a passed ball before Leeder offered up another sacrifice grounder to plate Ragsdale and put the ‘Cats up 4-1.
Chase Patrick rocketed another homer to begin the third inning, kicking off a three-run rally for the Wildcats. Barry followed with a single before the Vikings brought in a fresh pitcher, Cade Windham.
Wade Law slugged a single for the ‘Cats, advancing Wade Law to second base before Hutchens was beaned to load the bases. Leeder and Usry followed with a par of walks to push across two runners and leave the Wildcats up 7-1.
Schley blew up in the top of the fourth, sparking a 10-run game-ending rally to cinch the runaway victory.
Patrick opened with a walk before stealing second base. Barry advanced Patrick to third with a single before stealing second, himself. Law then stepped up to the plate to bash a three-run homer over the center field fence as the home fans roared their approval.
Ragsdale added a single before Hutchens took another one for the team, advancing on a plunk. Leeder then stepped up to bat in Ragsdale before Usry, sensing a pattern at this point, was forced to take another walk.
Sellars followed with a double to left field, bringing in Hutchens, Leeder, and Camron Vanlerberghe (pinch-running for Usry). Patrick and Howell followed with consecutive singles, re-loading the bases. Dakota Knight (pinch-running for Sellars scored on a passed ball before Law belted a single scoring Patrick and Howell, leaving the Wildcats ahead 17-1.
Leeder came in to pitch the final frame, quickly dispatching three batters to end the match.
Usry struck out two batters and gave up two hits in six innings of work on the mound for Schley. Leeder put the game away in the fourth, adding one strike-out.
Seven Schley batters collected hits in the match. Law led the ‘Cats from the plate, connecting on three hits, including one home run, and bringing in five runs.
Barry contributed three hits as well, including a homer and one RBI. Patrick brought in one RBI on his solo homer in two hits during the game. Ragsdale crossed the plate twice, contributing one hit. Sellars added four RBIs with one hit (a double) in the game. Howell and Leeder each connected on one hit with Leeder adding an RBI. Altogether, the Wildcats gained 12 hits in the contest.
Following the win, Cheek told the Times-Recorder, “I’m really proud of how we swung the stick in game two. Taylor’s Zane Kendrick is a quality pitcher and we’ve struggled against him some in the past. We had a much better approach at the plate and it paid off for us. Brett [Usry] was outstanding on the mound. He did a great job getting ahead in the count and got a lot more ground balls early and kept his pitch count down. That will be important in the next series. He was also really disciplined at the plate. As hot as he is right now, it’s tough to watch pitches. They just weren’t going to give him anything to hit in game two after what he did in the opener.”
“A huge key for us was our 5-9 [in the line-up] batters who went a combined 10-17 with seven RBIs and three home runs, scoring 11 of our 17 runs,” Cheek continued. “When we get all of our guys hitting like that, we can be pretty dangerous at the plate. “It was a huge day for sophomore designated hitter, Wade Law. I’m really proud of him. He struggled some in the first game, but had a much better approach and hit the baseball hard in game two. That was  a big lift for our team. He had hit four solo home runs on the day prior to his three-run blast. I was glad to get some guys on base in front of him for one of those… This was one of our best games of the year. I feel like we are starting to peak at the right time.”
On the upcoming Final-Four round of the state tournament, Cheek said, “We have a tough draw with Treutlen Monday. They are a phenomenal team with a heck of a coach in Brent Korn. We’ve run in to each other the past two years in the playoffs and they’ve all been tough games. We will have to play really good baseball to advance. Like us, they didn’t lose much from last year. It’s going to be a repeat of a great series. We need all of the Wildcat faithful to show up on Monday and give us that extra lift.”

Over 70 athletes head to ASHS for Special Olympics