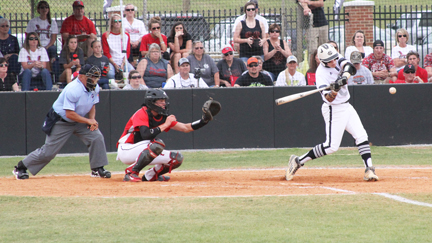 Michael Murray/Americus Times-Recorder: Schley County’s Will Bary belts a shot that falls inches short of an out-of-the park homerun during game one of the Wildcats’ semifinal series against the Treutlen Vikings on May 9.

Wildcats meet their match in semifinal round against Treutlen; wrap up season 26-4

Editor’s note:
They say that you can’t win them all… Sometimes you have to settle for just winning most of them. The Wildcats did just that this season, taking their fans on an exciting ride that stopped just short of its intended destination on Monday with a pair of losses to the Treutlen Vikings.
A look back into the team’s season reveals that, prior to the 2016 semifinals, the ‘Cats have not lost a match to a Class A opponent since mid-May 2015, and went on to grab significant wins this season over the much larger Perry High School Panthers as well as the Heard County High Braves. In fact, prior to the semifinal round, the Wildcats suffered only two losses this season; one to the Class AAAAA Hardaway High Hawks and the other to the Class AAAAAA Lee County Trojans.
There’s definitely something to be said for that.
Despite the unexpected end of the season, Schley baseball fans are certainly holding their heads high this week, knowing that the program has prepared three (as of this writing with more, presumably, to come) of the team’s athletes for collegiate-level play, as Blake Howell, Michael Leeder, and Brett Usry have recently signed scholarship agreements with Georgia colleges and universities.
Along with the fact that the team wrapped up the season with an impressive 26-4 record and a tentative third-place finish in the state, this shows that the Wildcats certainly have a lot to be proud of this year.

AMERICUS – The Schley County Wildcats drew the curtain on their 2016 baseball season on May 9 with a pair of hard-fought losses to the Treutlen Vikings in the semifinal round of the state playoffs in Ellaville.
The ‘Cats suffered a 3-1 defeat in the opening match of the double-header before retaking the field for the nightcap to see a similar fate in the form of a 2-1 loss.
With the pair of defeats, the Wildcats fell out of the running for the right to defend their 2015 state title, completing the season with a 26-4 record.
The Wildcats ran into trouble early in the first contest of the afternoon when Treutlen’s Titus Benjamin was called safe at first after Schley first baseman, Michael Leeder’s foot momentarily slipped off the bag. Treutlen slugger, Tristan Cone, then proceeded to step up and slug a home run to give the visitors an early 2-0 lead.
Leeder smacked a double to open the bottom of the frame, but was left stranded at second when Schley’s next three batters in line were promptly dispatched.
On the mound for Schley, Blake Howell (who recently broke Schley’s record for most strike-outs in a single season) kept the home fan’s hopes alive by blazing pitches past the Vikings’ next three batters for a quick three up, three down. 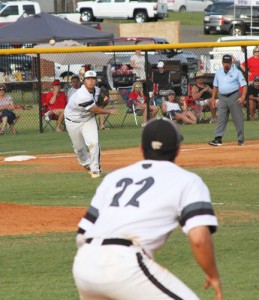 Michael Murray/Americus Times-Recorder:
Schley County’s Clint Sellars fires the ball to first-baseman, Michael Leeder to dispatch a runner during game two of the Wildcats’ semifinal series against Treutlen on May 9.

The ‘Cats made short work of the Vikings in the top of the third as well, but would not manage to ride their momentum into the fourth frame. After two innings with no hits, a Treutlen batter managed a single before the following player plated him with a double, putting the visitors up by three.
The Wildcats threatened in the bottom of the frame when Clint Sellars reached on a grounder, followed by another off of Howell’s bat. With two runners on base, Will Barry stepped up to the plate and belted a shot deep into centerfield. The home fans watched with bated breath as the ball inched closer and closer to no-man’s land. The would-be game-changing home run attempt fell mere inches short of the fence and was snagged by a Treutlen outfielder to the exasperation of Schley’s supporters.
Howell faced no more than three batters in each of the remaining innings, but the Vikings stubbornly refused to cede any ground until the bottom of the seventh. Howell opened with a walk before Barry advanced him to second with a single. With two men on base, Schley designated hitter, Wade Law, offered up a fielder’s choice that gave Howell the opportunity to complete his round trip and avoid a shut-out for the ‘Cats.
Howell dominated the mound for the Wildcats, pitching seven innings, striking out 11 batters, and giving up no free bases.
Leeder set the pace for the ‘Cats from the plate, connecting on a pair of hits, including one double. Usry connected on a pair of hits in the contest as well.
Barry, and Law each collected hits in the match, with Law bringing in the Wildcats’ only RBI.
Game two of the series saw the Wildcats take an early deficit as well, despite the ‘Cats out-hitting the Vikings 4-1 in the opening three frames.
The Wildcats out-hit the Vikings 6-3 in the contest.
Schley saw another potential game-changing near miss in the top of the third when, with a runner on base, Usry belted a shot deep into centerfield that was picked off a split second before clearing the fence.
Treutlen’s Magel Johnson brought in a runner on a double in the bottom of the third inning. Johnson later crossed the plate on a passed ball to give the visitors a 2-0 lead.
Schley made their move in the top of the fifth when Sellars offered up a sacrifice fly that allowed Reid Ragsdale to cross the plate and narrow the gap to 2-1.
That is where the score remained until the conclusion of the game thanks, in part, to a diving stop by Josh Hutchens in the bottom of the sixth, followed by a double play in which Leeder dispatched a runner at first before tossing the ball to Chase Patrick, who tagged a runner sliding into second.
Usry did six innings worth of work on the hill for the Wildcats, fanning eight batters. Patrick came in to complete the final inning.
Leeder, once again, led the ‘Cats from the plate, collecting three hits. Sellars connected on a pair of hits while Howell and Barry each contributed one.
Once again, the Wildcats out-hit the Vikings in the closer, connecting on seven at-bats to the Vikings’ two.