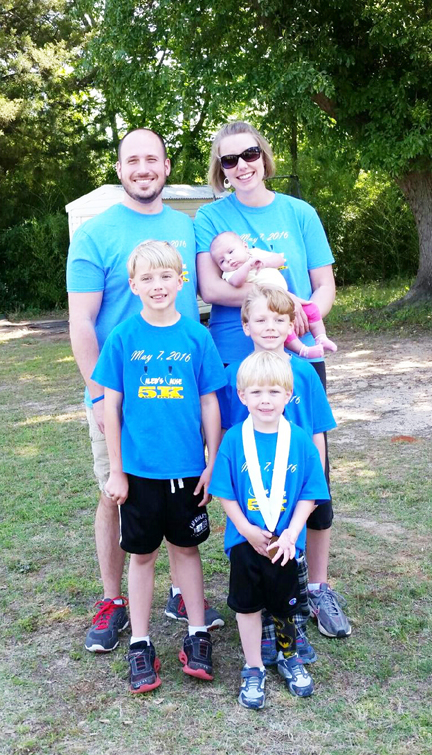 Submitted by Josh Davis: Caleb (front) poses with his family before the beginning of the race. Rear: Parents Josh and Samantha Davis with their infant daughter, Sydney. Center: Grayson and Landon Davis.

AMERICUS – 94 altruistic running enthusiasts donned their training shoes and headed to Georgia Southwestern State University (GSW) on the morning of May 7 to participate in the second annual Caleb’s Cause 5K & Fun Run to benefit the Scott Rigsby Foundation.
Following the race, Josh Davis, one of the event’s founders, spoke with the Times-Recorder. “My wife and I started the race as a way to honor our son Caleb, who is an amputee, and also to bring awareness to, and help other amputees,” Davis said on the event’s origins. “Our son, Caleb, was born with a condition called Fibular Hemimelia, which means his fibula didn’t develop in the womb. Because of this condition, he had to have amputation surgery at 10 months old, and was fitted for his first prosthesis right before his first birthday.”
“Caleb has been thriving ever since,” Davis continued. “If it weren’t for his Batman covered “leggy” (Caleb’s nickname for his prosthesis), you would never know he was different from any other three year-old.”
On race day, the weather was perfect with temperatures in the low to mid 60s right around start time. Prizes were awarded to the top male and female runners in the Fun Run and 5K event, as well as the top three males and females in each age group for both races.
Caleb handed out the medals and trophies at the race and posed for pictures with several runners.
“Everyone seemed to have a great time,” Davis stated. “We had fruit, granola bars, and music for the adults as well as inflatables for the kids… All around it was a great day, and there were a lot of people out there to support a great cause.”
Several members of Southland Academy’s cross country team came out to compete and show their support for Caleb’s Cause, many of whom walked away with top honors.
Southland junior, Billy Calcutt, was the overall male winner with a time of 18:43, followed by Schley County’s Aaron Pinckard. Southland senior, Chris Shattles, was the overall female winner , completing the race in 23:09. Shattles’ parents, Ed and Trina Shattles, won the male and female master’s divisions, respectively. Southland runners, Gray Torbert and Brian Miller, won age group awards, as did Raider alumnus, Ryan Singley, and Schley alumnus, Kaylon Holt. 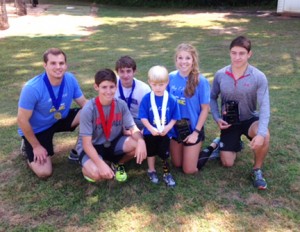 Following the event, Southland cross country head coach, Patrick Calcutt, told the Times-Recorder, “Many of their parents also participated. With track season over and cross country season starting up near the end of August, the summer road racing season is on.”
Davis went on to say that last year’s event was a huge success as well, with 160 registered participants. “We raised over $7,000 and we were able to use that money to help two ladies with medical expenses,” he said. “We paid for a specialized sleeve and prosthetic foot for Dianna Bennett, and we covered nine months of therapy visits for Jessica Powell, a woman from Camilla.”
Davis concluded by saying that he wished to thank all of the event’s sponsors, including Armetco Systems, Inc., After Hours Care of Americus Inc. and AMS, Inc., Citizens Bank of Americus, Clinic Drugstore, Engineered Flow LLC, Hyde Prosthetics & Orthodics, Magnolia Manor, Miller Auto Parts (NAPA), MWTibbitt Anesthesia LLC, PharmaCentra, Phoebe Sumter Medical Center, The UPS Store, and Williams Road Christian Student Center.
The race began and ended at Lady ‘Canes Field, on GSW campus.

From the editor: ATR to begin new “From the Archives”series