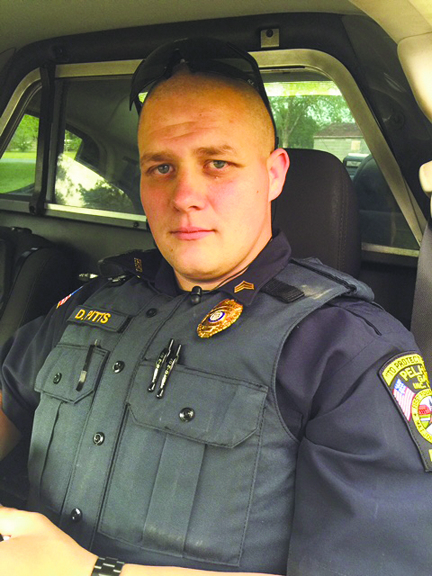 PELHAM — It was just another night on the job for 29-year-old Sgt. Derrick Pitts of the Pelham Police Department until he received a call to the scene of an accident just a few blocks from where he was patrolling.
“I received a call about midnight to a car crash, and I was the first to arrive on the scene,” said Pitts.
“The crash happened near an apartment complex, and there were two cars involved,” he said, a white car which was damaged and another car near the wood line area of the complex.
“The white car was empty and the people in the complex were  pointing to the car near the wooded area, which was on fire, and saying  they thought someone was still inside the vehicle,” Pitts said.
He immediately ran to the car to assess the vehicle. He found the vehicle engulfed in smoke.
“I couldn’t see anyone or anything inside the vehicle. The inside of the vehicle was consumed with smoke,” Pitts said. “I tried opening the driver’s side of the vehicle and it was locked. There was heat from the vehicle and stuff was popping  so I backed away.”
Pitts said he started yelling at the smoke filled vehicle, trying to alert someone if they were in the vehicle, while checking the other doors to gain entrance. Then the  horn started sounding. Pitts then checked the rear doors and then the front passenger’s door, which instantly popped open.
“Once the door was open, I saw someone’s hands and head laying across the seat,” Pitts said. He said the driver of the vehicle, a 49-year-old male, was lying over in the seat toward the passenger door while the front end of the vehicle was still in flames.
Pitts said, “I told him ‘we have to get out of here.’” He started dragging the driver of the vehicle out of the car to safety.
“My partner, who works with me on night shift, Earl Gilbert, also arrived on the scene immediately after dragging the victim from the vehicle and helped me drag him even further from the inflamed vehicle.”
Pitts said EMS picked up the victim of the crash and Georgia State Troopers were called to investigate the collision. The victim was treated for smoke and burn injuries and transported to the  Archbold Medical Center in Thomasville.
“Actually, the driver of the vehicle called the police department looking for me a couple of weeks after the accident and thanked me,” Pitts. “I told him that is my job. This is why I chose law enforcement; to help people. I told him I honestly believe the big man in the sky had a lot to do with me being just two blocks away. I believe he would not have made it out if I had not made it there in time.”
Pitts was born and raised in Americus, to parents Dewayne and Traci Pitts. Pitts and Gilbert will be honored with a Medal of Valor at a Pelham City Council meeting on May 19.