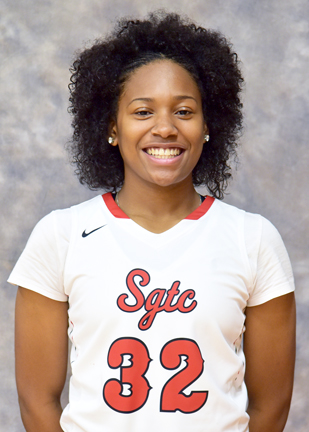 ROCHESTER, MI – South Georgia Technical College (SGTC) Lady Jets sophomore guard, Cierra Bond, from Inkster, Michigan recently signed a National Letter of Intent to play basketball at Oakland University in Rochester, Michigan, next season, announced SGTC Athletic Director and Lady Jets head coach, James Frey.
Bond played two years at SGTC and helped lead the Lady Jets to a 27–6 overall record and a 14–2 mark this past season in conference play. With Bond on the court, the Lady Jets also earned the Georgia Collegiate Athletic Association (GCAA) regular season conference title.
During Bond’s two years at South Georgia Tech, the Lady Jets won 56 games and lost only 14. They were consistently ranked in the National Junior College Athletic Association (NJCAA) national rankings and finished the 2014-15 season among the top eight NJCAA teams in the nation. The Lady Jets compiled a GCAA championship, an NJCAA Region XVII tournament title, a District J championship and a trip to the NJCAA national tournament during Bond’s tenure.
This past season, Cierra Bond was honored as the GCAA Player of the Week, was selected as a GCAA first team All-Conference selection, and was a GCAA All-Academic team member.
She led the Lady Jets in scoring during her sophomore (2015-16) season, averaging 17.3 points per game and came in second in rebounds, averaging 7.1 per game. She shot an impressive 45.9 percent from the field and 46.8 percent in conference play while also hitting 44.3 percent from the three point range and 81 percent from the free throw line.
“Cierra has been a tremendous asset to the South Georgia Technical College Lady Jets basketball team for the past two seasons and we are going to miss her,” said Frey.  “She has done an outstanding job on and off the court and I know that she will do well at the next level.”
Oakland University women’s head basketball coach Jeff Tungate said, “Cierra is a great addition to the Oakland University family. She is a winner who can score the basketball and really guard multiple positions. She was heavily recruited by some of the top mid-major programs in the country and also continues our trend of bringing in top tier student-athletes to Oakland University.”
Bond also played in the NJCAA All Star game in Niceville, Fla. as a freshman. Her uncle, Andre Bond, played at Oakland under head coach Greg Kampe from 1987-90.