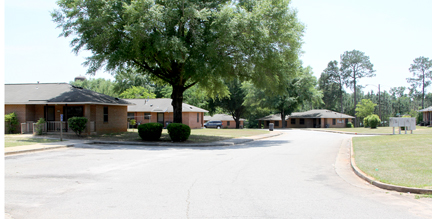 Michael Murray/Americus Times-Recorder: Police say that the shooting occured near the 100 block of Bozeman Circle, in Americus (shown above) early Sunday morning.

AMERICUS – The Americus Police Department (APD) is currently investigating a shooting which occurred very early on the morning of May 15 near the 100 block of Bozeman Circle, in Americus..
Major Richard McCorkle, of the APD, recently spoke with the Times-Recorder about the incident.
McCorkle stated that the identity of the victim was Gerald Holley, Jr., 39, of Smithville. He said that Holley had been shot in the upper leg shortly after midnight. The victim was then airlifted to the Macon Trauma Center.
According to reports, Holley has since been released and is believed to be in stable condition.
“We are still in the initial part of the investigation,” McCorkle stated. “We are currently conducting interviews, but it appears to have been a robbery attempt gone awry.”
McCorkle stated that two individuals are believed to have been involved in the shooting. “We are currently evaluating video that we think may relate to the investigation,” he said.
According to reports, the victim was found near the crime scene in a grassy area off of Rucker Street. The suspects had fled the scene by the time police arrived.
Anyone with any information that may pertain to this investigation is encouraged to contact local law enforcement.