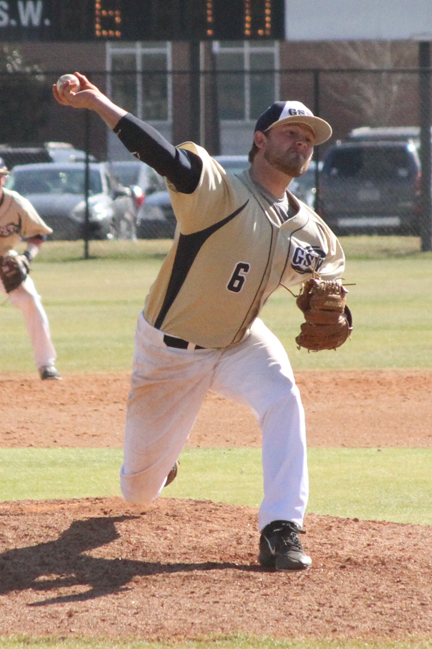 AMERICUS – Georgia Southwestern State University senior, Earl Dupree; junior, Davey King; and sophomores, Mitch Holloway, Matt Hubbard, and Josh Logan, have recently been named to the 2016 Peach Belt Conference All-Academic baseball team.
The Hurricanes set a program record for most honorees in a season with five.
Dupree garnered his third-consecutive All-Academic award as he started nine games on the mound this spring and appeared in another seven for GSW. The Hawkinsville, Ga., native threw 46 and one third inningslast season while  picking up three wins and a save. He recorded 37 strikeouts to finish his career with a total of 117.
In the classroom, the health and physical education major holds a 3.723 grade point average. 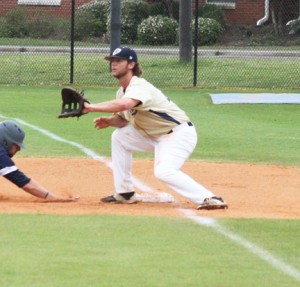 ATR File Photo:
GSW first-baseman, Davey King, crouches down to snag a throw during a 2016 contest. King was recently named to the PBC All-Academic Team.

King started 47 games this spring at first base for the Hurricanes. The Macon, Ga., native hit .222 and had a .283 on base percentage. King collected multiple hits in 11 games, including a four-for-five outing with a double and an RBI in the season opener. He belted a pair of home runs this spring and drove in 22 runners.
In the classroom, the accounting major owns a 3.301 grade point average.
Holloway, a relief pitcher from Plains, Ga., appeared in a team-high 21 games for the Hurricanes in 2016. He struck out 39 batters in 38 innings of work, picked up three wins, and led the squad with four saves.
In the classroom, the special education major holds a 3.614 grade point average.
Hubbard joined Holloway as a commodity on the GSW pitching staff coming out of the bullpen. The Lawrenceville, Ga., native made 16 appearances, threw 23 an two thirds innings while recording 17 strikeouts. Hubbard’s best outing came on March 18 when he threw two scoreless innings and did not allow a hit against UNC Pembroke.
In the classroom, the exercise science major holds a 3.326 grade point average.
Logan, a Lawrenceville, Ga., native, spent most of his time in left field this spring for the Hurricanes. He finished with a .259 batting average and a .333 on base percentage. Logan collected multiple hits in three games, including a two-for-three outing with a double and a walk, one run scored, and an RBI at Armstrong on Feb. 28.
In the classroom, the political science major holds a 3.542 grade point average.
The All-Academic team is part of a season-long program recognizing the outstanding accomplishments of PBC student-athletes in the classroom as well as on the field. Honorees are required to maintain a minimum of a 3.30 cumulative grade point average (on a 4.0 scale) and to have completed at least one full academic year at their current institution.