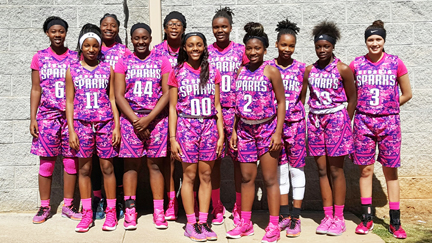 MARIETTA – The Georgia Sparks recently traveled to Suwanee Sports Academy in Marietta to compete in the first College Exposure Event of the 2016 season. The Sparks were able to finish the weekend with three wins and one loss. The wins were against good teams from North Carolina, Tennessee and Georgia and the loss was dealt by a team from Florida.
The highlight of the tournament was playing in front of University of South Carolina Head Coach, Dawn Staley, and Assistant Coach, Nikki McCrae. Notre Dame Head Coach, Muffet McGraw, was in attendance as well.
Soon after that successful tournament weekend, the Sparks traveled to Raleigh, NC to compete in the Raleigh Invitational College Exposure Tournament.
The Sparks finished the weekend with a 5–2 record, with the tenth-grade team finishing 1–2 and the ninth-grade team winning the division championship with a 4–0 record.
On their way to winning the championship, the Sparks defeated a pair of teams from North Carolina as well as teams from Virginia and Maryland.
“This season has started off really good for this group of young ladies with a championship in Jacksonville, Florida; a third-place finish in Atlanta; and now a championship in North Carolina,” said Georgia Sparks head coach, Rick Jones. “This was probably one of the best games we have played with the Sparks winning in a sudden death overtime after Jelissa Reese made two free throws with no time left on the clock.”
“This team played over 40 games together last season and we returned five starters with a very good group of new players so the present looks good but the future looks very good,” continued Jones.
“Thank you to all the parents who traveled with us. Without you trusting us with your girls we would not have the opportunity to enjoy this process.”
According to the organization’s website, the Georgia Sparks is a travel basketball program dedicated to developing character, education, respect, and basketball skills in young athletes throughout South Georgia. The website states that many of the teams’ players have gone on to attend college on basketball scholarships.
Several players from Americus and the surrounding counties participate in the program.