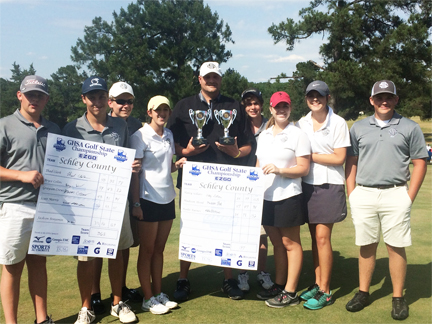 Submitted by Schley County Schools: Members of Schley County High School’s golf teams show off their runner-up trophies following the state tournament on May 16 in Augusta.

AUGUSTA – Following an impressive season, the Schley County Wildcats and Lady Wildcats’ golf teams earned the right to take part in the state tournament, held on May 16 at Goshen Plantation Golf Course in Augusta
Both teams earned a second-place finish at the state tourney.
Each team faced competition from the top seven Class-A programs in the state at the tournament.
The school’s boys team faced off against Trion, Lincoln County, Georgia Military College (GMC), Towns County, Charlton County, Hawkinsville, and Commerce.
Trion took top honors in the boys division with a team score of 341. Schley’s boys followed close behind for a second-place finish with a team score of 365. Lincoln County and GMC tied for third-place honors, each turning in a 368 team total.
The boys’ final score of 365 marks a season-best game for the Wildcats; 25 shots lower than their previous best 18-hole score of the year.
Schley’s Thad Clark was the individual runner-up in the tournament with a score of 78. Bryce Collins followed closely with a score of 82. Grayson Crews shot an 18-hole round of 94 and Scott Morris rounded out the Wildcats’ score, turning in a 111.  Jackson Benjamin also competed for the Wildcats.
The Schley County girls hit the links to take on Portal, Claxton, Trion, Commerce, Charlton County, Echols, and Hawkinsville.
Portal took the top prize with a team score of 186. The Lady Wildcats followed close behind, turning in a score of 197 to snag runner-up honors. Claxton earned the third-place prize with a total score of 207.
Madison Hood led the Lady Wildcats by posting a score of 94. Hood’s score was also good enough to place her third overall in the individual category.
Haley Sellars shot 103 to round out the team score. Kadie Barnes played through a shoulder injury and also competed for the Wildcats.
Asked for a comment on the team’s impressive season, Schley head golf coach, Gabe Theiss, told the Times-Recorder, “I am extremely proud of the work the kids put in and the results their work produced.”