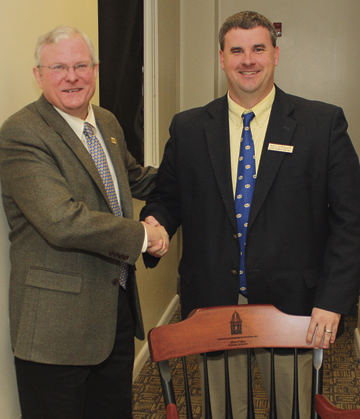 Mark Pace, left, is presented with a gift for his service as chairman by Will Peterson, incoming chairman.

AMERICUS  — The Georgia Southwestern Foundation Board of Trustees held its spring full board meeting May 19. This served as local real estate agent Mark Pace’s last meeting as chairman. Will Peterson, assistant vice president of Human Resources for Phoebe Putney Health System, was voted the new chair and will serve a two-year term.
During the meeting, Barry Blount was voted a life trustee and two other current members were re-elected: Jay Cliett and Doug Moses. Nominated and elected by their peers, the 31-member group provides external oversight to the Foundation’s operations.
Blount is a past chair of the board, market president for SB&T Bank, and mayor of Americus. He has served on the following committees: executive, investment, finance and compensation. Cliett is a professor emeritus in mathematics at GSW, having been on the faculty for 26 years. He was first elected to the board of trustees in 1998. Moses is a CPA and partner at Mauldin and Jenkins, LLC and just completed a two-year term as GSW Foundation treasurer. He will serve as vice chairman for the next two years.
Along with Peterson and Moses, the remaining officers of the Foundation Board Executive Committee include Mark Pace, immediate past chairman; Lou Chase, treasurer; Ricky Arnold, secretary; and Ryan Young, nominating committee chair.
Immediately following the semi-annual Board of Trustees meeting, the Foundation hosted a donor reception at Sally Run in Americus.
“We are looking forward to working with the new board leadership to continue to positively advance the University,” said Reda Rowell, GSW Foundation executive director. “Sally Run provided us the perfect venue to recognize our President’s Circle members and say thank you to the record number of donors who were able to join us for the special evening.” 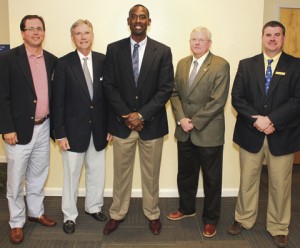 The President’s Circle level of giving includes donors who contribute $1,000 or more to the GSW Foundation on an annual basis. Also honored at the reception were those who through their cumulative giving are on the permanent wall of honor. Interim President Charles Patterson reiterated how important the generosity of donors is to the success of GSW.
“The support of our donors is critical in providing scholarships for our students, financial support for competitive athletics and an overall positive collegiate experience,” said Patterson. “Our recent enrollment growth is due, in part, to the support of our donors and the ability to provide more scholarship dollars to students in need.”
The Foundation provides funds for GSW and manages assets and gift accounts for the University. The Foundation’s purpose is to promote in various ways the cause of higher education in the state of Georgia, with particular emphasis on the development of Georgia Southwestern State University. Contributions to the GSW Foundation are tax deductible. For more information, visit www.gsw.edu/foundation.